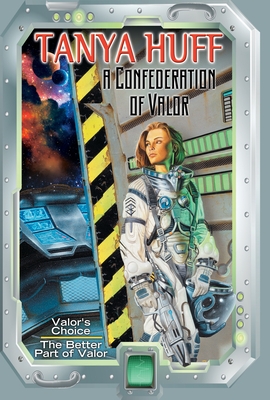 In Valor's Choice, Staff Sergeant Torin Kerr and her crew get yanked from a well-deserved shore leave in order to participate in an “easy” mission. They are to act as an honor guard for a diplomatic visit to the world of the Silsviss, reptilian aliens with a strong appreciation for war and conquest. Ideally, the visit will result in an alliance and a new member world for the Confederation. Sure, there'd been rumored sightings of the Others on the planet, sworn enemies of the Confederation, but there are always rumors. Everything seems to be going perfectly. Maybe too perfectly...

In The Better Part of Valor, Torin Kerr's outspokenness gets her in a load of trouble. After she tells a two-star general what she really thinks of him, she finds herself separated from her platoon and sent off on a perilous assignment. She's ordered to escort a scientific expedition to an unidentified alien ship abandoned in space -- is it a trap set by the Others or simply a derelict? It's Torin's job to find out -- and to babysit a commanding officer who might prove more of a menace to the mission's success than anything they encounter.

Tanya Huff may have left Nova Scotia at three, and has lived most of her life since in Ontario, but she still considers herself a Maritimer. On the way to the idyllic rural existence she shares with her partner Fiona Patton, six cats, and a chihuahua, she acquired a degree in Radio and Television Arts from Ryerson Polytechnic—an education she was happy to finally use while writing her recent Smoke novels. Of her previous twenty-three books, the five—Blood Price, Blood Trail, Blood Lines, Blood Pact, Blood Debt—featuring Henry Fitzroy, bastard son of Henry VIII, romance writer, and vampire are among the most popular.

Praise for the series:
“An intriguing alien race, a likeable protagonist, a fast moving plot, and a rousing ending. What more could you ask for?” —Science Fiction Chronicle

“The action is solid, and the marines are an entertaining mix of oddballs.”—Locus

“Balanced against the high body count is Huff’s dialogue, which is snappy and humorous, enmeshed in the racial diversity of the platoon. As a heroine, Kerr shines. She is cut from the same mold as Ellen Ripley of the Aliens films: tough but humane, fiercely protective of her charges, and utterly determined to prevail… Like her heroine, Huff delivers the goods. Valor’s Choice does not make light of war, but at the same time it is incredibly fun to read. Howlingly funny and very suspenseful. I enjoyed every word." —Science Fiction Weekly

“A writer of great versatility, Ms. Huff captures the ambiance of an elite military group and adds a rare depth to skillful characterization to make each personality stand up and be counted." —RT Reviews

“Exciting, mysterious and full of action and puzzles to solve. Torin is everything you want in an action heroine…and this book will leave readers anxious for her next adventure.” —Kliatt

“Huff’s flair for battle scenes and her clarity in visual descriptions support the action quite well.” —Science Fiction Chronicle