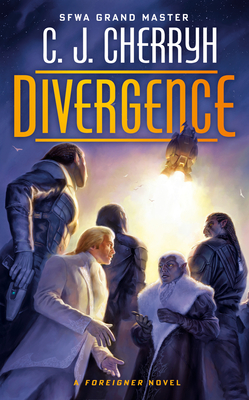 This is book number 21 in the Foreigner series.

The twenty-first book in the beloved Foreigner saga continues the adventures of diplomat Bren Cameron, advisor to the atevi head of state.

The overthrow of the atevi head of state, Tabini-aiji, and the several moves of enemies even since his restoration, have prompted major changes in the Assassins' Guild, which has since worked to root out its seditious elements—a clandestine group they call the Shadow Guild. With the Assassins now rid of internal corruption, with the birth of Tabini's second child, and with the appointment of an heir, stability seems to have returned to the atevi world. Humans and atevi share the space station in peaceful cooperation, humans and atevi share the planet as they have for centuries, and the humans' island enclave is preparing to welcome 5000 human refugees from a remote station now dismantled, and to do that in unprecedented cooperation with the atevi mainland.

In general Bren Cameron, Tabini-aiji's personal representative, returning home to the atevi capital after securing that critical agreement, was ready to take a well-earned rest—until Tabini's grandmother claimed his services on a train trip to the smallest, most remote and least significant of the provinces, snowy Hasjuran—a move concerning which Tabini-aiji gave Bren a private instruction: protect her. Advise her.

Advise her—perhaps. As for protection, she has a trainload of high-level Guild. But since the aiji-dowager has also invited a dangerously independent young warlord, Machigi, and a young man who may be the heir to Ajuri, a key northern province—the natural question is why the dowager is taking this ill-assorted pair to Hasjuran and what on this earth she may be up to.

With a Shadow Guild attack on the train station, it has become clear that others have questions, too. Hasjuran, on its mountain height, overlooks the Marid, a district that is part of the atevi nation only in name—a district in which Machigi is one major player, and where the Shadow Guild retains a major stronghold.

Protect her? Ilisidi is hellbent on settling scores with the Shadow Guild, and her reasons for this trip and this company now become clear.  One human diplomat and his own bodyguard suddenly seem a very small force to defend her from what she is setting in motion.

C. J. Cherryh planned to write since the age of ten. When she was older, she learned to use a typewriter while triple-majoring in Classics, Latin, and Greek. With more than seventy books to her credit, and the winner of three Hugo Awards, she is one of the most prolific and highly respected authors in the science fiction field. Cherryh was recently named a Damon Knight Memorial Grand Master by the Science Fiction Writers of America. She lives in Washington state. She can be found at cherryh.com.

Praise for the Foreigner series:

"This is the kind of anthropological SF of which [Cherryh] is an acknowledged master." —Booklist

"A seriously probing, thoughtful, intelligent piece of work, with more insight in half a dozen pages than most authors manage in half a thousand." —Kirkus Reviews

“One of the best long-running SF series in existence...Cherryh remains one of the most talented writers in the field." —Publishers Weekly

“This is one of the best science fiction series currently running….by this point, the series has turned into a complicated set of thrillers involving political and factional turmoil, as well as a close and detailed examination of the troubled interactions between human and alien cultures.” —Strange Horizons

“Cherryh plays her strongest suit in this exploration of human/alien contact, producing an incisive study-in-contrast of what it means to be human in a world where trust is nonexistent.” —Library Journal

"A large new novel from C.J. Cherryh is always welcome. When it marks her return to the anthropological SF in which she has made such a name, it is a double pleasure. The ensuing story is not short on action, but stronger (like much of Cherryh's work) on world-building, exotic aliens, and characterization. Well up to Cherryh's usual high standard." —The Chicago Sun-Times

“[Cherryh] avoids any kind of slump with a quick-moving and immediately engaging plotline, and by balancing satisfying resolutions with plenty of promises and ominous portents that are sure to keep readers’ appetites whetted.” —RT Reviews

“These are thinking man’s reads with rich characters and worlds and fascinating interactions that stretch out over many generations.” —SFFWorld

“Cherryh's forte is her handling of cross-cultural conflicts, which she does by tying her narrative to those things her point-of-view character would know, think, and feel.”—SFRevu

"The Foreigner series is about as good as it gets...so finely and densely wrought that you may end up dreaming of sable-skinned giants with gold eyes, and the silver spun delicacy of interstellar politics." —SF Site