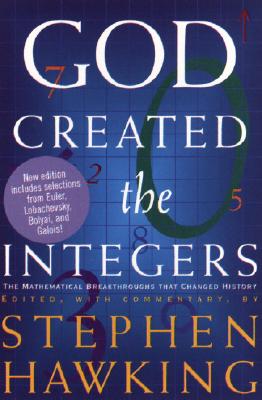 
Email or call for price.
Bestselling author and physicist Stephen Hawking explores the "masterpieces" of mathematics, 25 landmarks spanning 2,500 years and representing the work of 15 mathematicians, including Augustin Cauchy, Bernard Riemann, and Alan Turing. This extensive anthology allows readers to peer into the mind of genius by providing them with excerpts from the original mathematical proofs and results. It also helps them understand the progression of mathematical thought, and the very foundations of our present-day technologies. Each chapter begins with a biography of the featured mathematician, clearly explaining the significance of the result, followed by the full proof of the work, reproduced from the original publication.
Stephen Hawking was one of the most highly celebrated and recognized scientists who has ever lived. He first came to mainstream prominence with the publication of A Brief History of Time, and followed with a second triumph, The Universe in a Nutshell, and most recently, The Grand Design. The media has called Hawking "the most intelligent man in the world today" and "the scientific heir to Einstein, Newton, and Galileo." He lived in Cambridge, England.