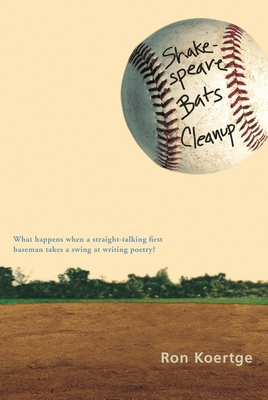 
Email or call for price.
"This funny and poignant novel celebrates the power of writing to help young people make sense of their lives and unlock and confront their problems." — School Library Journal (starred review)

When MVP Kevin Boland gets the news that he has mono and won’t be seeing a baseball field for a while, he suddenly finds himself scrawling a poem down the middle of a page in his journal. To get some help, he cops a poetry book from his dad’s den — and before Kevin knows it, he’s writing in verse about stuff like, Will his jock friends give up on him? What’s the deal with girlfriends? Surprisingly enough, after his health improves, he keeps on writing, about the smart-talking Latina girl who thinks poets are cool, and even about his mother, whose death is a still-tender loss. Written in free verse with examples of several poetic forms slipped into the mix, including a sonnet, haiku, pastoral, and even a pantoum, this funny, poignant story by a master of dialogue is an English teacher’s dream — sure to hook poetry lovers, baseball fanatics, mono recoverers, and everyone in between.
Ron Koertge, the author of several acclaimed novels for young adults -
including STONER & SPAZ and THE BRIMSTONE JOURNALS - has been a faculty member for more than thirty-five years at Pasadena City College, where he has taught everything from Shakespeare to remedial writing. He also writes poetry for adults. Of SHAKESPEARE BATS CLEANUP, he says, "I find it funny that kids will willingly follow the rules in any game, but if you give them rules for writing poetry, they rebel!"