The Dark Mirror: Book One of the Bridei Chronicles (Paperback) 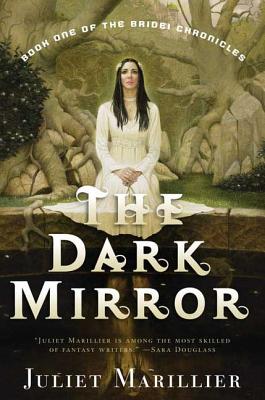 This is book number 1 in the Bridei Chronicles series.

THE DARK MIRROR is the first book in Juliet Marillier's Bridei Chronicles.

Bridei is a young nobleman, a fosterling of one of the most powerful druids in the land, Briochan. All of Bridei's memories are of this dark and mysterious man who seems to be training him for a special purpose he will not divulge.

But, everything changes when on one bitter MidWinter Eve Bridei discovers a child on their doorstep--a child abandoned by the fairie folk. In order to avoid the bad luck that seems to come with fairie folk, all counsel the babe's death. But, Bridei follows his instinct and, heedless of the danger, fights to save the child. Briochan, though wary, relents.

As Bridei comes to manhood, and the foundling Tuala blossoms into a beautiful young woman, he begins to feel things he didn't know were possible.

Briochan sees this and feels only danger, for Tuala could be a key part in Bridei's future…or could spell his doom.

JULIET MARILLIER achieved international recognition with the publication of the first two award-winning novels in the Sevenwaters Trilogy, a historical fantasy set in Ireland and Britain in the ninth century, and loosely based on the fairy tale “The Six Swans”. Her other historical fantasy series include the Viking-inspired Light Isles duology and the Bridei Chronicles set in north Britain in the time of the Picts.

“Juliet Marillier is among the most skilled of fantasy writers--she is far better than Marion Zimmer Bradley. The Sevenwaters trilogy is so beautiful, and so magically woven, that it deserves to become a fantasy classic. This trilogy should be a ‘must have' for any fantasy reader.” —Sara Douglass

“Fans of Judith Tarr, in whose footsteps this tale meticulously treads, will be enthralled.” —Publishers Weekly (starred review) on The Dark Mirror

“Juliet Marillier just keeps getting better. Some passages here are stunning their beauty, and more often than not you'll be quite wrong if you think you know what comes next. That's the delight of it.” —Locus on Foxmask

“An engrossing, beautifully written work of historical fiction and a portrait of a man's fierce struggle to find his own truth.” —Booklist on Wolfskin