The Gate of Fire (Oath of Empire #2) (Paperback) 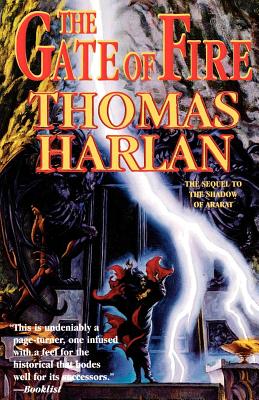 The sorcerer Dahak plots from his hidden citadel to regain the Peacock Throne. Prince Maxian, having raised both Julius Ceasar and Alexander the Great from the dead, now considers how to use them to free Rome from the curse of the Oath. Thyatis has fled with the widowed Queen of Persia to a hidden island; Dwyrin's thaumaturgic unit is shattered as Zoe discovers the destruction of Palmyra and, as its new queen, vows revenge against Rome. And in Mecca, Ahmet's friend and Palmyra's lieutenant Mohammed receives a vision, and a command, and the power to strive against the forces of darkness.

Thomas Harlan is the author of the highly regarded “Oath of Empire” fantasy series, starting with The Shadow of Ararat, The Gate of Fire, and The Storm of Heaven. An internationally-known game designer, he lives in Salem, Oregon.

“This is undeniably a page-turner, one infused with a feel for the historical that bodes well for its successors.” —Booklist

“There's no doubt about it: Thomas Harlan is a marvelous talespinner” —Locus