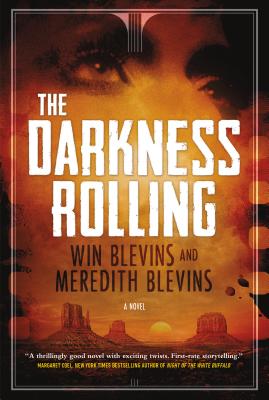 By Win Blevins, Meredith Blevins
Email or call for price
Out of Print - This Title is Unlikely to be Available.

This is book number 1 in the Yazzie Goldman series.

Upon his return from World War II, Seaman Yazzie Goldman realizes that not much has changed at his family's trading post in Monument Valley—and yet everything is different. His grandfather, Moses Goldman, has suffered a debilitating stroke, and while Yazzie's mother Nizhoni is doing her best, the post is slowly falling apart.

Nizhoni is thrilled that Yazzie has returned to help bring the trading post back to prosperity. Excitement comes from the nearby filming of a John Ford movie starring Henry Fonda. Director Ford enlists the tall, strong, half-Navajo and half-Jewish Yazzie to serve as a translator, and as a bodyguard for the beautiful actress Linda Darnell. Someone is sending Linda threatening letters, and as Yazzie investigates, he finds himself falling for her.

Yazzie isn't the only one to have recently returned home. A man who calls himself Zopilote, the Buzzard, has spent the last twenty-five years in jail steeping himself in the ancient Navajo chant "Darkness Rolling" and consumed with rage at the people who put him there—Yazzie's mother and grandfather.

A thrilling, heart-pounding read of family, adventure, romance, and vengeance, The Darkness Rolling is the first in an evocative historical mystery series by award-winning authors Win and Meredith Blevins. It was a finalist for the Spur Award for Best Western Contemporary Novel.

“I came naturally by my yen to wander far places, physical, imaginary, and spiritual...”-Win Blevins

Win Blevins, of Cherokee, Irish and Welsh descent, is from a family that was on the move, always west. Win's childhood was spent roaming, his dad a railroad man. Win went to school in St. Louis, and the family spent summers in little towns along the tracks of the railroads. He listened to the whistles blow at night and wanted to go wherever the trains went.

Seldom has a young man been in more of a hurry. Using scholarships, Win ran through a succession of colleges, receiving his master's degree, with honors, in English from Columbia University. He taught at Purdue University and Franklin College, then received a fellowship to attend USC. Win became a newspaperman - a music, theater, and film critic for both major Los Angeles papers. In 1972 he took the big leap-he quit his job to write out his passions-exploring and learning wild places-full time. His greatest passion of all has been to set the stories of these places, their people and animals, colors and smells, into books.

Win climbed mountains for ten years. A fluke blizzard caught him on a mountaintop and froze his feet, an end to climbing mountains, but not to exploring them. He's rafted rivers in the west, particularly the Snake and the San Juan, and was briefly a river guide. His love of the great Yellowstone River gave him a fine appreciation for the people who first loved these wild places. Along the way, Win lost the use of his legs and learned to sail, deciding a boat was a good place for a man without legs. He regained the use of his legs, and maintains his love of the open seas.

His first book, Give Your Heart to the Hawks, is still in print after thirty years. Other works include Stone Song, a novel about Crazy Horse, for which he won the 1996 Mountains and Plains Booksellers Award and the 1996 Spur Award. He's written multiple books, including a Dictionary of the American West, numerous screenplays and magazine articles.

He lives quietly in the canyon country of Utah. His passions grow with time-his wife Meredith, the center of his life, their five kids and grandkids. Classical music, baseball, roaming red rock mesas in the astonishing countryside, playing music... He considers himself blessed to be one of the people creating new stories about the west, and is proud to call himself a member of the world's oldest profession-storyteller.

Meredith lives with her husband, author Win Blevins, and their family in the Canyonlands.  She has been a creative arts therapist, an award-winning travel writer, and has published five books, including The Hummingbird Wizard, Long and Winding Road and Red Hot Empress.

“When crime hits the movie business on the Navajo nation in The Darkness Rolling, it takes courage and heart to bring pure evil to justice. Yazzie Goldman has them both. A stellar first in a new suspense series.” —Robert K. Tanenbaum, New York Times bestselling author of Tragic

“Win and Meredith Blevins have raised the bar for intelligent thrillers with The Darkness Rolling. This novel's power will stay with me for a long time.” —Donald Bain, bestselling author of the "Murder, She Wrote" series and the Margaret Truman Capital Crimes series