Armed for Victory: Prayer Strategies That Unlock the End-Time Armory of God (Paperback) 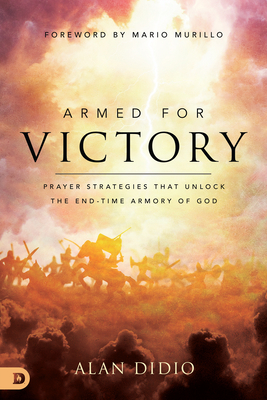 Are you struggling to overcome the spiritual enemies that are coming against you?

You may be using the wrong weaponry.

God is opening His armory and releasing weapons of warfare that haven't been seen in generations. The enemy is using these perilous end times to cause many believers to become worn out, depressed, and defeated because they are unwittingly using the wrong weapons in battle.

It's time to get equipped with the right weapons.

In Armed for Victory, Pastor and author Alan DiDio brings revelation about spiritual warfare tactics that will empower and activate you for victory. Don't live one more day in deception, denial, or defeat. It's time to overcome

Unlock Heaven's armory, and get equipped with supernatural weapons for victory.

You were born to win, and you have access to the intelligence, tools, and strategies that guarantee your victory. Learn these principles, use the right weapons, and secure victory in every battle

Pastor Alan DiDio is the host of Encounter Today, the Encounter Underground Podcast and the founder of Encounter Christ Church. In more than two decades of ministry he has traveled internationally working with the persecuted church around the world and directed an international prayer center where he prayed one on one with more than 100,000 people. This unique experience comes out in his writings and ministry as he seeks to ignite the fire of God in the hearts of humanity and equip end-time believers for the next great awakening.