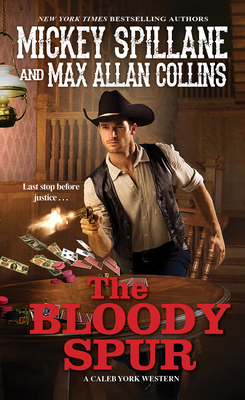 This is book number 3 in the A Caleb York Western series.

You can outnumber Caleb York … but you can’t outgun him.

Rancher George Cullen doesn’t like the Santa Fe Railroad’s plan to drive a spur through his town. He intends to put up a fight—even though everyone else in Trinidad, New Mexico, including his own daughter, stands on the side of the railroad …

Sheriff Caleb York rides out to the Bar-O to reason with his old friend. But Cullen’s ex-partner, Burt O’Malley, is back in town after a twenty-year stint in the pen. And hired gun Alver Hollis, aka the Preacherman, has shown up with two cronies, claiming they’re in town for a big poker game. With the whole town on the verge of a shootout, Caleb keeps a firm grip on his Colt .44. Soon enough, he’ll take dead aim to keep the peace …
“Spillane is a master in compelling you to always turn the next page.”
—New York Times

“Spillane is a pioneer of tough-guy ethics.”
—Washington Post

Max Allan Collins is the New York Times bestselling, award-winning author of Road to Perdition, the graphic novel that inspired the Oscar-winning movie starring Paul Newman and Tom Hanks. He has been named a Grand Master by the Mystery Writers of America. Also a filmmaker, Collins created the documentary Mike Hammer's Mickey Spillane. He lives in Iowa.