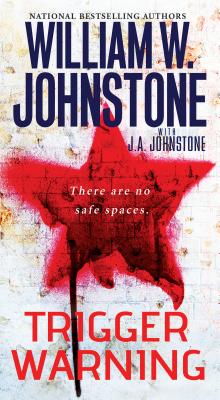 JOHNSTONE COUNTRY. WHERE OTHERS FEAR TO TREAD.

From the bestselling authors of The Doomsday Bunker, Black Friday, and Stand Your Ground comes the explosive story of a college under siege—and freedom under fire . . .

POLITICAL CORRECTNESS WON’T SAVE YOU

Former Army Ranger Jake Rivers is not your typical Kelton College student. He is not spoiled, coddled, or ultra-lib like his classmates who sneer at the “soldier boy.”

Rivers is not “triggered” by “microaggressions.” He is not outraged by “male privilege” and “cisgender bathrooms.” He does not need a “safe space.” Or coloring books. Jake needs an education. And when terror strikes, the school needs Jake . . .

Without warning, the sounds of gunfire plunge the campus into a battle zone. A violent gang of marauders invade the main hall, taking students as hostages for big ransom money. As a veteran and patriot, Jake won’t give in to their demands. But to fight back, he needs to enlist his fellow classmates to school these special snowflakes in the not-so-liberal art of war. This time, the aggression isn’t “micro.” It’s life or death. And only the strong survive . . .

Though known largely for their westerns, national bestselling authors William W. Johnstone and J.A. Johnstone have written some of the most explosive and timely thrillers of the last decade, with almost one million copies in print. These include the nationally bestselling Tyranny, a ripped-from-the-headlines story of citizens’ rights and government wrongs, and Black Friday, a chilling depiction of terrorism on American soil. Their other thriller titles include Vengeance is Mine, Stand Your Ground, The Blood of Patriots, Home Invasion, Jackknife, Remember the Alamo, Suicide Mission, and The Bleeding Edge.

The Johnstones know that freedom is never free. They fully support our military and regularly donate books to our troops. You can learn more about this as well as upcoming releases and special promotions by visiting williamjohnstone.net or kensingtonbooks.com.