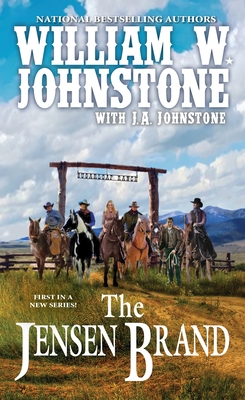 This is book number 1 in the The Jensen Brand series.

THE GREATEST WESTERN WRITERS OF THE 21ST CENTURY

Bestselling authors William W. Johnstone and J.A. Johnstone have thrilled readers with the epic struggles and hard-fought triumphs of the pioneering Jensen family. Now this great American saga continues—with the next generation of Jensens . . .

It’s the dawn of a new century. But on the vast Sugarloaf Ranch not much has changed since legendary gunfighter Smoke Jensen and his wife Sally tamed the land two decades ago. Raising cattle is still a dangerous business—and just as deadly as ever. When Smoke is injured swapping bullets with some cow thieves, Sally puts out a call for help to Matt, Ace, and the rest of the Jensen clan. But time is running out. The bloodthirsty rustlers are ready to strike again—and there are lots more of them. And the Sugarloaf’s last defense is Smoke and Sally’s next of kin . . .

Enter the Jensen twins. Denise and her brother Louis have just returned home from their schooling in Europe. Louis is studying to be a lawyer and is too sickly to defend the ranch. But Denise is to the manor born—she can ride like a man, shoot like her daddy, and face down the deadliest outlaws like nobody’s business. And there’ll be plenty opportunity to prove she’s got Jensen blood in her veins—cold, deadly, and playing for keeps . . .

William W. Johnstone is the New York Times and USA Today bestselling author of over 300 books, including the series THE MOUNTAIN MAN; PREACHER, THE FIRST MOUNTAIN MAN; MACCALLISTER; LUKE JENSEN, BOUNTY HUNTER; FLINTLOCK; THOSE JENSEN BOYS; THE FRONTIERSMAN; SAVAGE TEXAS; THE KERRIGANS; and WILL TANNER: DEPUTY U.S. MARSHAL. His thrillers include BLACK FRIDAY, TYRANNY, and STAND YOUR GROUND. Visit his website at www.williamjohnstone.net.

“Every day with Bill was an adventure story in itself. Bill taught me all he could about the art of storytelling. ‘Keep the historical facts accurate,’ he would say. ‘Remember the readers, and as your grandfather once told me, I am telling you now: be the best J.A. Johnstone you can be.”