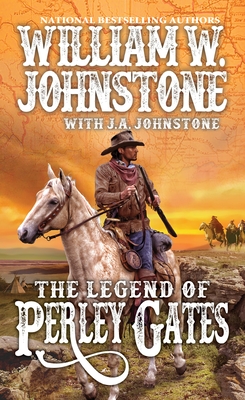 This is book number 1 in the A Perley Gates Western series.

From bestselling authors William W. and J.A. Johnstone comes the fiery saga of Perley Gates, a legend born out of the brutality and violence of the American West . . .

He’s the son of a cattle rancher. A restless young dreamer who, under normal circumstances, would follow in his father’s footsteps. Normal, however, is not his style. Like his famous grandfather and namesake Perley Gates—a hell-raising mountain man with a heavenly name—young Perley wants adventure, excitement, and freedom. And like his grandfather before him, he will find his dream—in the untamed wilds of a lawless frontier . That dream though might just become a nighmare . . .

After his father’s death, Perley strikes out on his own. His first order of business is to track down the grandfather whose name he shares. When he crosses into Oklahoma Territory, young Perley discovers that the trail is full of dead ends—and near-death encounters. Hostile Indians, wanted outlaws, and bloodthirsty killers are just a few of the dangers waiting for him. And the closer he gets to finding the original Perley Gates, the closer he comes to meeting his Maker at the fabled gates they’re named for . . .

William W. Johnstone is the New York Times and USA Today bestselling author of over 300 books, including the series THE MOUNTAIN MAN; PREACHER, THE FIRST MOUNTAIN MAN; MACCALLISTER; LUKE JENSEN, BOUNTY HUNTER; FLINTLOCK; THOSE JENSEN BOYS; THE FRONTIERSMAN; SAVAGE TEXAS; THE KERRIGANS; and WILL TANNER: DEPUTY U.S. MARSHAL. His thrillers include BLACK FRIDAY, TYRANNY, STAND YOUR GROUND, and THE DOOMSDAY BUNKER. Visit his website at www.williamjohnstone.net or email him at dogcia2006@aol.com.

“Every day with Bill was an adventure story in itself. Bill taught me all he could about the art of storytelling. ‘Keep the historical facts accurate,’ he would say. ‘Remember the readers, and as your grandfather once told me, I am telling you now: be the best J.A. Johnstone you can be.”