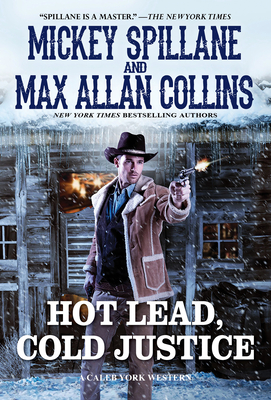 This is book number 5 in the A Caleb York Western series.

When Sheriff Caleb York's deputy is shot down in cold blood, York has no doubt the bullets were meant for him. It's the first nasty step in a plan rustled up by Luke "Burn 'Em" Burnham--eliminate the law, corral a team to rob a bank in booming Las Vegas, New Mexico, then lay low. With a treacherous local merchant for cover, and York out of the picture, all they'll have to do is wait for the calm. Then they get wind of one little hitch: not only is York still alive, but he's gunning for justice--and revenge.

As the winter weather bears down, a chilling cat-and-mouse begins. York isn't about to let Burnham and his gang of miscreants get away. It'd be a cold day in hell if he did.

Mickey Spillane is the legendary crime writer who created Mike Hammer (I, the Jury, Kiss Me Deadly). Before his death at the age of 88 in 2006, Spillane chose long-time friend Max Allan Collins to complete his unfinished works and act as his literary executor.

Max Allan Collins, Shamus-Award winner and 2017 Mystery Writers of America Grand Master Edgar Award-winner, is the New York Times bestselling author of fiction, nonfiction and graphic novels, including Road to Perdition, which was adapted into the Oscar-winning film starring Paul Newman and Tom Hanks. He is the author of a number of popular mysteries,including Quarry, which was adapted into a Cinemax original crime drama series. He and his wife also coauthor the acclaimedTrash 'n' Treasures cozy mystery series under the name Barbara Allan. In addition to writing, Collins is a filmmaker and createdthe documentary Mike Hammer's Mickey Spillane. He lives in Iowa and can be found online at MaxAllanCollins.com.