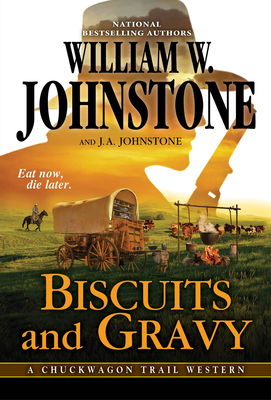 This is book number 4 in the A Chuckwagon Trail Western series.

Johnstone Justice. Get It While It’s Hot.

Dewey “Mac” Mackenzie is no ordinary chuckwagon cook. He’s a marked man on the run who works cattle drives to stay one step ahead of his enemies. If these hired killers catch up to him, he’ll be slinging guns instead of hash—with a side order of revenge that’s best served cold . . .

A hot meal, a hard drink, and maybe a friendly hand of poker—that’s all Mac Mackenzie wants when he drifts into the small town of Harcourt City, Montana. What he gets is a fistful of trouble.  When he defends a saloon girl from the unwanted advances of some local toughs, he earns the wrath of the town’s powerful namesake, Oscar Harcourt. Harcourt rules this place with an iron fist—and a steely eyed gang of thugs. Now he has his eyes on a ranch belonging to the saloon girl and her brother. A ranch they won’t give up—without a fight.

To raise funds, the brother and sister arrange a cattle drive to Rattlesnake Creek, and they want Mac to join them. As an experienced cattle pusher and chuckwagon cook, he’s sure to be an asset. But as a secret gunslinger with a price on his head, he might end up getting them all killed.

Now the cattle are ready to go. Mac is ready for anything. But with so many devils ridng on their tails, Mac is ready to turn up the heat—and send them back to hell . . .