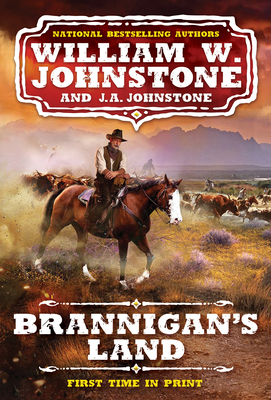 The greatest western writers of the 21st century, William W. Johnstone and J.A. Johnstone, kick off a blazing new series featuring Tynan “Ty” Brannigan, a man who traded his tin star for a cattle ranch and a family. But the men he left to rot behind bars have their own hash to settle with him…

Once a respected lawman in Kansas and Oklahoma, Ty Brannigan ended his career as town marshal of Warknife while he was still young enough to marry, start a family, and raise cattle. Now nearly sixty, he’s a proud husband, father of four, and proprietor of the Powderhorn Ranch on the outskirts of his old stomping grounds. It’s been close to twenty years since Brannigan hung up his six-guns. Now he’s more content wrangling cows than criminals…

But for every remorseless outlaw Brannigan put in jail, noosed, or left the vultures, he made even more enemies. Thieves and killers looking to settle old scores have tracked the ex-lawdog to his ranch. They’ve made the mistake of targeting his wife and children—only to discover that Ty Brannigan enforces his own law with a lightning-fast draw and a deadshot aim.