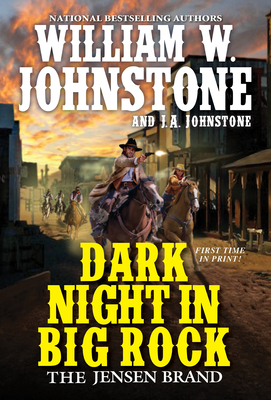 This is book number 5 in the The Jensen Brand series.

With their acclaimed novels of the Jensen family, bestselling authors William W. Johnstone and J.A. Johnstone have captured the pioneering spirit of America itself. Now in the fifth chapter of The Jensen Brand, the long-awaited return of Smoke Jensen’s son ignites a powderkeg of problems for the town of Big Rock, Colorado. This time, it’s personal—and definitely fatal…

Smoke Jensen is mighty proud of his son Louis for finishing law school. But he can’t help being a little disappointed that Louis isn’t returning to the Sugarloaf Ranch. Instead, he’s setting up his own law practice in nearby Big Rock—a career choice that turns out to be every bit as dangerous as fending off cattle rustlers. The boy’s first case lands him smack in the middle of a heated dispute between two riled-up ranchers over water rights. If Louis can’t settle them down, the whole thing could blow up into a bloody range war. Then a scheming con man shows up in town to stir up trouble—and ends up dead. Now Louis has to defend his sister’s boyfriend on murder charges. What’s worse, the real killer is still out there. And he’s ready to slaughter again…

Smoke Jensen’s son may be a lawyer now. But if there’s one thing he learned from his daddy, it’s that in places like Big Rock, men live and die by one law alone: the law of the gun…