The Klondike Fever: The Life and Death of the Last Great Gold Rush (Paperback) 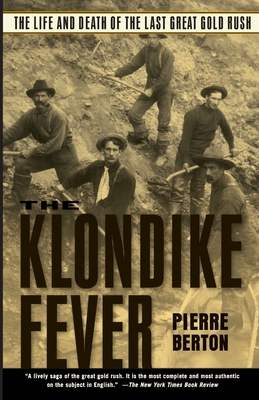 The Klondike Fever: The Life and Death of the Last Great Gold Rush (Paperback)


Usually Ships in 1-5 Days
In 1897 a grimy steamer docked in Seattle and set into epic motion the incredible succession of events that Pierre Berton's exhilarating The Klondike Fever chronicles in all its splendid and astonishing folly. For the steamer Portland bore two tons of pure Klondike gold. And immediately, the stampede north to Alaska began. Easily as many as 100,000 adventurers, dreamers, and would-be miners from all over the world struck out for the remote, isolated gold fields in the Klondike Valley, most of them in total ignorance of the long, harsh Alaskan winters and the territory's indomitable terrain. Less than a third of that number would complete the enormously arduous mountain journey to their destination. Some would strike gold. Berton's story belongs less to the few who would make their fortunes than to the many swept up in the gold mania, to often unfortunate effects and tragic ends. It is a story of cold skies and avalanches, of con men and gamblers and dance hall girls, of sunken ships, of suicides, of dead horses and desperate men, of grizzly old miners and millionaires, of the land — its exploitation and revenge. It is a story of the human capacity to dream, and to endure.
Prisoners of the North is Pierre Berton's fiftieth book. These include Klondike Fever, also available from Carroll & Graf; the New York Times bestseller, The Arctic Grail; Niagara; The Invasion of Canada; and Flames Across the Border. He received three Governor General's awards for non-fiction, two National Newspaper Awards, the Stephen Leacock Medal for Humour, and the National History Society's inaugural Pierre Berton Award. He was a member of the Newsman's Hall of Fame and a Companion of the Order of Canada and lived in Ontario until his death in 2005.