A Glass of Water (Hardcover) 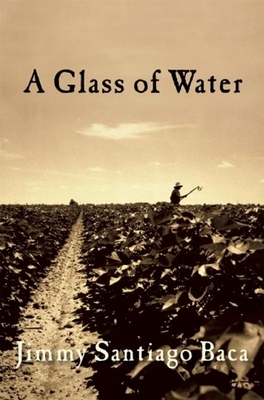 By Jimmy Santiago Baca
Email or call for price
Out of Print - This Title is Unlikely to be Available.

Award-winning memoirist, poet, and activist, Jimmy Santiago Baca has established himself as an inspiring and important spokesperson for the Chicano experience, continually giving voice to the voiceless. His first novel, A Glass of Water is a gripping tale of family, loyalty, ambition, and revenge that takes us inside the tragedies unfurling along our country's borders. Having made the nearly deadly journey across the border from Mexico, Casimiro and Nopal spend their days in the chili fields, building a life for their young sons. But when Nopal is brutally murdered, the boys are left to navigate this capricious new world without her. The elder son, Lorenzo, follows his father's footsteps, devoting himself to the land, and falling in love with a strong-minded young woman who's come to their migrant camp to study the lives of its workers. But Vito, hot-blooded and restless, breaks away to find fame as an itinerant boxer, gaining notoriety inside the ring and out. Eventually, the brothers' journeys converge, bringing them face to face with a common enemy. A Glass of Water is a searing, heartfelt tribute to brotherhood, and an arresting portrait of the twisted paths people take to claim their piece of the American dream.

Jimmy Santiago Baca’s poems read like novels, and his novels read like poems. . . . Baca fills his prose with evocative, naturalistic details, [and] his poetry’s beating heart . . . weaves stories of Chicano loss and redemption, often through a reconnection to Earth’s natural elements. . . . Baca’s tangible earthiness seeps through [A Glass of Water] . . . but his bucolic prose is anything but lulling; as the story builds to a violent resolution, so do the political undercurrents. But ultimately, it’s transcendent performanceCarmen’s song and Vito’s populist pugilism, not to mention Baca’s own transformation through literaturethat offers salvation.”Wells Dunbar, The Austin Chronicle

[With A Glass of Water] Baca manages to put a face on desperation. He decries the exploitation of migrant farm workers in the United States . . . [and] derogates not only an exploitive American economic system, but also Mexican drug lords driving the poor off their land, who become homeless or victims of violence. . . . [But] a field worker’s life isn’t all toil and gloom as reflected in the lives of the characters. There’s also passion, joy, love of family, adventure, love, longing, and accomplishment. The imagery is striking, the prose lyrical.”Aurelio Sanchez, The Albuquerque Journal

[A] blistering novel . . . The sheer passion that drives Baca’s [work] is undeniable.”Publishers Weekly

[With] image-rich writing . . . A Glass of Water adds another strong voice to the growing body of literature on immigrants and migrant farm workers. . . . Baca should be commended for tackling injustice in his fiction.”Don Waters, High Country News

A well-written and at times lyrical saga told with understanding and compassion.”Library Journal

Impressive . . . Fierce and uncompromising, but also beautiful and wise, A Glass of Water might be [Baca’s] most accessible work yet. . . . Baca’s concerns are universal: family, loyalty, the dignity of hard work, and, above all, love.”Kevin Canfield, Pasatiempo

"Buy an extra copy of this book and send it to your senator. I’ll pay for it! It’s the best antidote around to the sorrowful, dehumanizing discourse on undocumented immigrants going on in Washington. Hard economic times always translate into extra misery for the more vulnerable. Ay, and we used to be known as the land where people were given a fair chance!"--Ilan Stavans