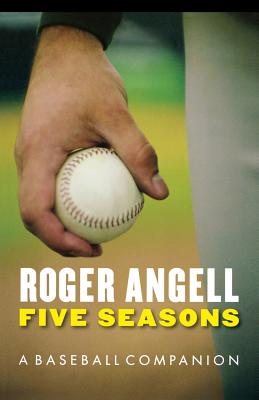 Five Seasons covers the baseball seasons from 1972 through 1976, described as the “most significant half decade in the history of the game.” The era was notable for the remarkable individual feats of Hank Aaron, Lou Brock, and Nolan Ryan, among others. It also presented one of the best World Series of all time (1975), including still the greatest World Series game ever played (Game Six).

Along with visiting other games and campaigns, Roger Angell meets a trio of Tigers-obsessed fans, goes to a game with a departing old-style owner, watches high-school ball in Kentucky with a famous scout, and explores the sad and astounding mystery of Steve Blass’s vanished control. Angell’s Five Seasons is a gem and a gift for baseball lovers of all ages.

Roger Angell (1920–2022) was a writer and fiction editor with the New Yorker. His works include The Summer Game (available in a Bison Books edition), Late Innings, and Game Time.

“A book for people who miss good writing, who miss clarity, lucidity, style and passion. It’s a book for all seasons.”—New York Times Book Review

“No one writes better about baseball.”—Boston Globe

“Roger Angell is our best writer on baseball.”—Newswee

“Angell’s passion for baseball is enough to convert the heathen.”—Time

“Roger Angell is a stunning writer…. A writer who can translate the nuances of the game with perfect clarity.”—Tim McCarver, Wall Street Journal

"Fans know that Angell, fiction editor for The New Yorker, is one of the heavy hitters of baseball writing. Dating back to 1977 and 1972, respectively, these are two of his finest collections. Essential for public and academic libraries."—Library Journal

"Angell is best known for 'The Summer Game,' in which he revolutionized baseball writing by bringing an essayist's eye to the ballpark. This collection, though, is even better, tracking the sport through the mid-1970s and opening with one of Angell's signature efforts—an evocative meditation on the ball itself."—Los Angeles Times