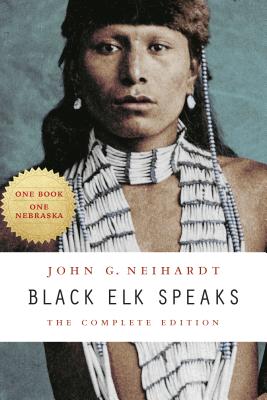 Black Elk Speaks, the story of the Oglala Lakota visionary and healer Nicholas Black Elk (1863–1950) and his people during momentous twilight years of the nineteenth century, offers readers much more than a precious glimpse of a vanished time. Black Elk’s searing visions of the unity of humanity and Earth, conveyed by John G. Neihardt, have made this book a classic that crosses multiple genres. Whether appreciated as the poignant tale of a Lakota life, as a history of a Native nation, or as an enduring spiritual testament, Black Elk Speaks is unforgettable.
Black Elk met the distinguished poet, writer, and critic John G. Neihardt in 1930 on the Pine Ridge Reservation in South Dakota and asked Neihardt to share his story with the world. Neihardt understood and conveyed Black Elk’s experiences in this powerful and inspirational message for all humankind.
This complete edition features a new introduction by historian Philip J. Deloria and annotations of Black Elk’s story by renowned Lakota scholar Raymond J. DeMallie. Three essays by John G. Neihardt provide background on this landmark work along with pieces by Vine Deloria Jr., Raymond J. DeMallie, Alexis Petri, and Lori Utecht. Maps, original illustrations by Standing Bear, and a set of appendixes rounds out the edition.
John G. Neihardt (1881–1973) is the author of several classics, including A Cycle of the West and Eagle Voice Remembers, both available in Bison Books editions. He was named Nebraska’s first poet laureate and foremost poet of the nation by the National Poetry Center in 1936.

“Black Elk Speaks is an extraordinarily human document—and beyond that the record of a profoundly spiritual journey, the pilgrimage of a people toward their historical fulfillment and culmination, toward the accomplishment of a worthy destiny.”—N. Scott Momaday

“If any great religious classic has emerged in [the twentieth] century or on this continent, it must certainly be judged in the company of Black Elk Speaks.”—from Vine Deloria Jr.’s foreword