The Stars Are Fire: A novel (CD-Audio) 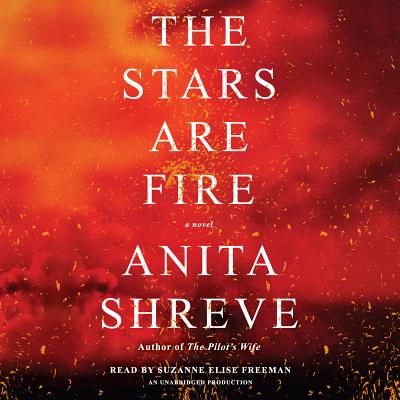 By Anita Shreve, Suzanne Elise Freeman (Read by)
$35.00
Email or call for price.

“WOW! I began this book and couldn't put it down until the last page. Shreve is a masterful storyteller who mesmerizes with her marvelous characters. Grace is a woman who is stronger than she knows and the adversity she faces proves that point. I loved her resilience and zest for life. The men in her life - Gene, her husband; Aiden, the pianist who loves her; and John, a doctor and friend - are beautifully developed and kept me engaged to the end. A terrific read. Loved it!”
— Stephanie Crowe, Page & Palette, Fairhope, AL

From the New York Times best-selling author of The Weight of Water and The Pilot's Wife (an Oprah's Book Club selection): an exquisitely suspenseful new novel about an extraordinary young woman tested by a catastrophic event and its devastating aftermath--based on the true story of the largest fire in Maine's history

In October 1947, after a summer long drought, fires break out all along the Maine coast from Bar Harbor to Kittery and are soon racing out of control from town to village. Five months pregnant, Grace Holland is left alone to protect her two toddlers when her husband, Gene, joins the volunteer firefighters. Along with her best friend, Rosie, and Rosie's two young children, Grace watches helplessly as their houses burn to the ground, the flames finally forcing them all into the ocean as a last resort. The women spend the night frantically protecting their children, and in the morning find their lives forever changed: homeless, penniless, awaiting news of their husbands' fate, and left to face an uncertain future in a town that no longer exists. In the midst of this devastating loss, Grace discovers glorious new freedoms--joys and triumphs she could never have expected her narrow life with Gene could contain--and her spirit soars. And then the unthinkable happens--and Grace's bravery is tested as never before.

ANITA SHREVE's novels have sold more than six million copies and have been translated into thirty-six languages. She lives with her husband in New Hampshire.

“Long before Liane Moriarty was spinning her “Big Little Lies,” Shreve was spicing up domestic doings in beachfront settings with terrible husbands and third-act twists. She still is, as effectively as ever, this time with a narrative literally lit from within.”
—Mary Pols, New York Times Book Review


“Like her sensational best-selling 1998 novel The Pilot’s Wife, about a widow who discovers her pilot husband had a second family, The Stars Are Fire explores what happens in the secret spaces between married people…Masterful… lingers long after the last page is turned, like the smoke from a wildfire.”
—Patty Rhule, USA Today


"This is a suspenseful and heartwarming story of not just overcoming but also growing in the face of great difficulty."
—Booklist


"This is sure to be a best seller. Shreve's prose mirrors the action of the fire, with popping embers of action, licks of blazing rage, and the slow burn of lyrical character development. Absolutely stunning."
—Library Journal  (starred review, Editors' Spring Picks)


"It is a book of small moments, a collection of seemingly simple themes that build to surprising and moving crescendoes. Shreve's spare, economic prose suits her character’s practicality and initial hesitance to determine the course of her own life... Shreve's crisp writing becomes more expansive in the moments when her protagonist consciously stretches beyond the boundaries of her previously narrow life."
—BookPage


“I had the sense as I read Shreve’s newest and 18th novel, The Stars Are Fire, that I was in the company of millions of phantom future readers who will adore this novel and devour it and recommend it to all their friends and book clubs…Shreve’s storytelling choices feel organically wedded to her writing, a winning and essentially magical alchemy…It’s all totally irresistible.  Along with storytelling mojo and stylistic verve, this novel has an excellent, suspenseful premise: Grace’s life is upended and ultimately transformed by a real-life historical catastrophe, the wildfires that spread through coastal Maine in October of 1947, following months of severe drought….In fact, The Stars Are Fire is so virtuosic, so infallibly readable, it could very well sell more copies than all Shreve’s others combined.”
—Kate Christensen, Portland Press-Herald


"One of the pleasures of reading The Stars are Fire is Shreve’s ability to impart an authentic feel of 1940s daily life... Shreve’s writing is lovely."
—WBUR.com ‘The ARTery’