Eight Men Out: The Black Sox and the 1919 World Series (Paperback) 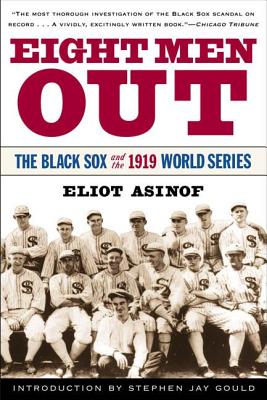 First published in 1963, Eliot Asinof's Eight Men Out has become a timeless classic of a scandalous world series.

The headlines proclaimed the 1919 fix of the World Series and attempted cover-up as "the most gigantic sporting swindle in the history of America!" Eliot Asinof has reconstructed the entire scene-by-scene story of the fantastic scandal in which eight Chicago White Sox players arranged with the nation's leading gamblers to throw the Series in Cincinnati. Mr. Asinof vividly describes the tense meetings, the hitches in the conniving, the actual plays in which the Series was thrown, the Grand Jury indictment, and the famous 1921 trial. Moving behind the scenes, he perceptively examines the motives and backgrounds of the players and the conditions that made the improbable fix all too possible.

Here, too, is a graphic picture of the American underworld that managed the fix, the deeply shocked newspapermen who uncovered the story, and the war-exhausted nation that turned with relief and pride to the Series, only to be rocked by the scandal.

Far more than a superbly told baseball story, this is a compelling slice of American history in the aftermath of World War I and at the cusp of the Roaring Twenties.

Eliot Asinof was born in the year of the ill-fated World Series fix. After graduating from Swarthmore College in 1940, he played minor league baseball for the Philadelphia Phillies organization. He wrote numerous books, including Eight Men Out: The Black Sox and the 1919 World Series, and a variety of plays for television and motion pictures. He lived in Ancramdale, New York, in a house he built with his son.

“The most thorough investigation of the Black Sox scandal on record ... A vividly, excitingly written book:” —Chicago Tribune

“As thrilling as a cops and robbers tome.” —The Boston Globe