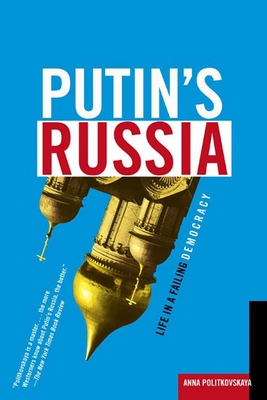 A searing portrait of a country in disarray and of the man at its helm, from "the bravest of Russian journalists" (The New York Times)

Hailed as "a lone voice crying out in a moral wilderness" (New Statesman), Anna Politkovskaya made her name with her fearless reporting on the war in Chechnya. Here, she turned her steely gaze on the multiple threats to Russian stability, among them Vladimir Putin himself.

Rich with characters and poignant accounts, Putin's Russia depicts a far-reaching state of decay. Politkovskaya describes an army in which soldiers die from malnutrition, parents must pay bribes to recover their dead sons' bodies, and conscripts are even hired out as slaves. She exposes rampant corruption in business, government, and the judiciary, where everything from store permits to bus routes to court appointments is for sale. And she offers a scathing condemnation of the war in Chechnya, where kidnappings, extra-judicial killings, rape, and torture beget terrorism rather than fighting it. Finally, Politkovskaya denounces both Putin, for stifling civil liberties as he pushes the country back to a Soviet-style dictatorship, and the West, for its unqualified embrace of the Russian leader.

Sounding an urgent alarm, Putin's Russia is a gripping portrayal of a country in crisis and the testament of a great and intrepid reporter, who received death threats and survived assassination attempts for her scathing criticism of the Kremlin. Tragically, on October 7, 2006, Politkovskaya was shot and found dead in an elevator in her Moscow apartment building. After several years of investigations, five men were imprisoned for her murder.

Anna Politkovskaya (1958 - 2006) was a journalist, human rights activist, and special correspondent for Novaya gazeta, a newspaper known for its outspoken stance against Russian politics. She was honored by Amnesty International and Index on Censorship. In 2000 she received Russia’s prestigious Golden Pen Award for her coverage of the war in Chechnya, and in 2005 she was awarded the Civil Courage Prize. Known for her fierce criticism of the Kremlin, on October 7, 2006, Politkovskaya was shot and found dead in an elevator in her apartment building in Moscow. Her assassination, believed to be a contract killing, was met with international outrage and support. After a decade of investigations, five men were sentenced to prison for her murder.

Politkovskaya's books include Putin's Russia: Life in a Failing Democracy.