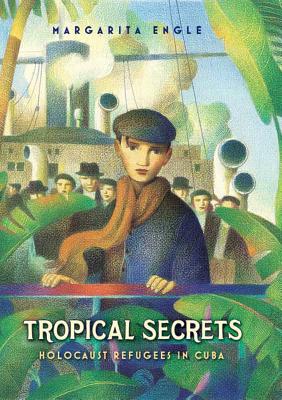 Daniel has escaped Nazi Germany with nothing but a desperate dream that he might one day find his parents again. But that golden land called New York has turned away his ship full of refugees, and Daniel finds himself in Cuba.

As the tropical island begins to work its magic on him, the young refugee befriends a local girl with some painful secrets of her own. Yet even in Cuba, the Nazi darkness is never far away . . .

Margarita Engle is a Cuban American poet, novelist, and journalist whose work has been published in many countries. She is the author of young adult nonfiction books and novels in verse including The Surrender Tree, a Newbery Honor Book, The Poet Slave of Cuba, Hurricane Dancers, The Firefly Letters, and Tropical Secrets. She lives in northern California.

“This book is an outstanding choice for young people of all reading skills. Reluctant readers will be encouraged by the open layout and brief text, and everyone will be captivated by the eloquent poems and compelling characters.” —School Library Journal, starred review

“Engle gracefully packs a lot of information into a spare and elegant narrative that will make this historical moment accessible to a wide range of readers.” —Publishers Weekly

“Engle's tireless drive to give voice to the silenced in Cuban history provides fresh options for young readers.” —Kirkus Reviews

“As in The Poet Slave of Cuba (2006) and The Surrender Tree (2008), both selected as Booklist Editors' Choice titles, Engle's latest book tells another story set in Cuba of those left out of the history books. In fluid, clear, free verse, two young people speak in alternating personal narratives...the international secrets make for a gripping story about refugees that becomes sharply focused through the viewpoint of the boy wrenched from home, haunted by the images of shattered glass and broken family.” —Booklist

“This moving free-verse historical novel tells the tale of thirteen-year-old Daniel, a Jewish refugee who escapes Nazi Germany in 1939 in hopes of finding safety abroad…the emphasis on the inner life of the characters gives the narrative an emotional drama that transcends its period.” —Bulletin of the Center for Children's Books

“Readers who think they might not like a novel in verse will be pleasantly surprised at how quickly and smoothly the story flows...The book will provide great fodder for discussion of the Holocaust, self-reliance, ethnic and religious bias, and more.” —VOYA