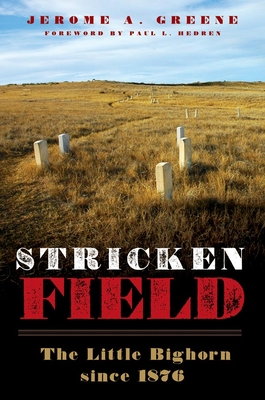 The Little Bighorn Battlefield National Monument is the site of one of America's most famous armed struggles, but the events surrounding Custer's defeat there in 1876 are only the beginning of the story. As park custodians, American Indians, and others have contested how the site should be preserved and interpreted for posterity, the Little Bighorn has turned into a battlefield in more ways than one. In Stricken Field, one of America's foremost military historians offers the first comprehensive history of the site and its administration in more than half a century.

Jerome A. Greene has produced a compelling account of one of the West's most hallowed and controversial attractions, beginning with the battle itself and ending with the establishment of an American Indian memorial early in the twenty-first century. Chronicling successive efforts of the War Department and the National Park Service to oversee the site, Greene describes the principal issues that have confounded its managers, from battle observances and memorials to ongoing maintenance, visitor access, and public use.

Stricken Field is a cautionary tale. Greene elucidates the conflict between the Park Service's dual mission to provide public access while preserving the integrity of a historical resource. He also traces the complex events surrounding the site, including Indian protests in the 1970s and 1980s that ultimately contributed to the 2003 dedication of a monument finally recognizing the Lakotas, Northern Cheyennes, and other American Indians who fought there.