The Essays (Chicana & Chicano Visions of the Americas #7) (Hardcover) 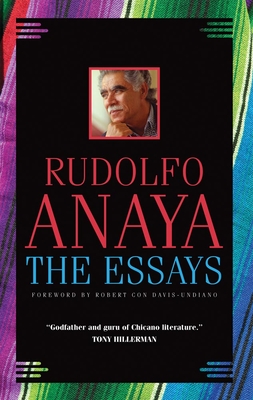 "The storyteller's gift is my inheritance," writes Rudolfo Anaya in his essay "Shaman of Words." Although he is best known for Bless Me, Ultima and other novels, his writing also takes the form of nonfiction, and in these 52 essays he draws on both his heritage as a Mexican American and his gift for storytelling. Besides tackling issues such as censorship, racism, education, and sexual politics, Anaya explores the tragedies and triumphs of his own life.

Collected here are Anaya's published essays. Despite his wide acclaim as the founder of Chicano literature, no previous volume has attempted to gather Anaya's nonfiction into one edition. A companion to The Man Who Could Fly and Other Stories, the collection of Anaya's short stories, The Essays is an essential anthology for followers of Anaya and those interested in Chicano literature.

Pieces such as "Requiem for a Lowrider," "La Llorona, El Kooko ee, and Sexuality," and "An American Chicano in King Arthur's Court" take the reader from the llano of eastern New Mexico, where Anaya grew up, to the barrios of Albuquerque, and from the devastating diving accident that nearly ended his life at sixteen to the career he has made as an author and teacher. The point is not autobiography, although a life story is told, nor is it advocacy, although Anaya argues persuasively for cultural change. Instead, the author provides shrewd commentary on modern America in all its complexity. All the while, he employs the elegant, poetic voice and the interweaving of myth and folklore that inspire his fiction. "Stories reveal our human nature and thus become powerful tools for insight and revelation," writes Anaya. This collection of prose offers abundant new insight and revelation.