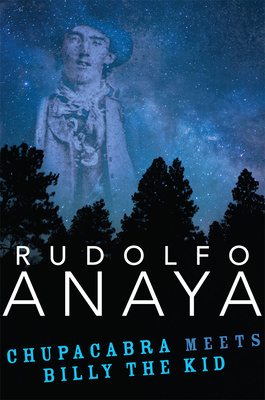 
After years of working with at-risk youth, Chicana social worker Rosa Medina leaves Los Angeles's gang-ridden barrios and street violence to settle in the New Mexican village of Puerto de Luna. Her goal: to write a novel about Bilito--Billy the Kid. It all sounds straightforward enough, but things get more complicated--and a lot more exciting--when Rosa is transported back in time to 1879, where she participates in the infamous Lincoln County War, riding alongside Bilito. How Rosa achieves this fantastical feat of time travel, and what she discovers about herself, Bilito, and her Nuevomexicano heritage, unfolds through the course of this novel by master storyteller Rudolfo Anaya. As she travels in time, Rosa passes into an alternative reality inhabited by extraordinary creatures, including shapeshifters, extraterrestrials, Bigfoot, and ChupaCabra. Readers familiar with Anaya's previous ChupaCabra mysteries will remember the heroine's earlier dealings with the elusive monster, a frightening creature of Hispanic folklore. But new dangers are also lurking for Rosa in the land of her ancestors, as a secret group of scientists known as C-Force threatens to clone ChupaCabra to create an army that will rule the world. As she encounters the Nuevomexicana women whose families suffered during the Lincoln County conflict, Rosa finds new reasons to fear the ChupaCabra--and to fight against the forces that threaten to shake the county to its core. With her laptop computer in her saddlebag, Rosa rides into the Lincoln County War and accompanies Bilito on his last ride. By the end, her very soul is transformed, as she realizes that the same evil forces that propelled the violence along the Pecos River are much more resilient than she had hoped. In the finest tradition of magical realism and historical fiction, Anaya invites us to consider the ways that the supernatural reveals the realities of the past--and of our own times.