Being Heumann: An Unrepentant Memoir of a Disability Rights Activist (Paperback) 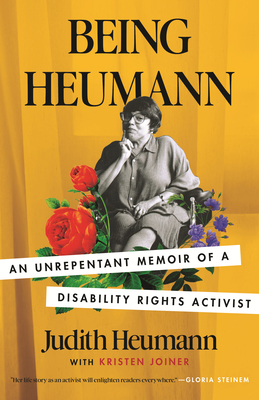 A Publishers Weekly Best Book of the Year for Nonfiction

"...an essential and engaging look at recent disability history."— Buzzfeed

One of the most influential disability rights activists in US history tells her personal story of fighting for the right to receive an education, have a job, and just be human.

A story of fighting to belong in a world that wasn’t built for all of us and of one woman’s activism—from the streets of Brooklyn and San Francisco to inside the halls of Washington—Being Heumann recounts Judy Heumann’s lifelong battle to achieve respect, acceptance, and inclusion in society.

Paralyzed from polio at eighteen months, Judy’s struggle for equality began early in life. From fighting to attend grade school after being described as a “fire hazard” to later winning a lawsuit against the New York City school system for denying her a teacher’s license because of her paralysis, Judy’s actions set a precedent that fundamentally improved rights for disabled people.

As a young woman, Judy rolled her wheelchair through the doors of the US Department of Health, Education, and Welfare in San Francisco as a leader of the Section 504 Sit-In, the longest takeover of a governmental building in US history. Working with a community of over 150 disabled activists and allies, Judy successfully pressured the Carter administration to implement protections for disabled peoples’ rights, sparking a national movement and leading to the creation of the Americans with Disabilities Act.

Candid, intimate, and irreverent, Judy Heumann’s memoir about resistance to exclusion invites readers to imagine and make real a world in which we all belong.

Judith Heumann is an internationally recognized leader in the Disability Rights Independent Living Movement. Her work with a wide range of activist organizations (including the Berkeley Center for Independent Living and the American Association of People with Disabilities), NGOs, and governments since the 1970s has contributed greatly to the development of human rights legislation and policy benefiting disabled people. She has advocated for disability rights at home and abroad, serving in the Clinton and Obama administrations and as the World Bank’s first adviser on disability and development. Connect with her on Twitter (@judithheumann) and Facebook (TheHeumannPerspective).

Kristen Joiner is a writer, activist, and producer. She is the co-author of Being Heumann: An Unrepentant Memoir of a Disability Rights Activist and the YA version of the book, Rolling Warrior: The Incredible, Sometimes Awkward, True Story of a Rebel Girl on Wheels Who Helped Spark a Revolution with Judy Heumann, Former Advisor to Presidents Clinton and Obama, star of the Oscar-nominated Crip Camp, and one of the most influential disability rights activists in US history. Being Heumann has been optioned by Apple TV for a feature film directed by Oscar-winner Sian Heder (C.O.D.A.). Kristen co-founded the youth filmmaking organization, Scenarios USA, and executive produced short films written by young people and directed by award-winning directors. She lives in New Zealand with her family.

“Thoughtful and illuminating, this inspiring story is a must-read for activists and civil rights supporters.”
—Publishers Weekly, Starred Review

“A driving force in the passage of the Americans With Disabilities Act looks back on a long career of activism . . . A welcome account of politics in action, and for the best of causes.”
—Kirkus Reviews

“Consider this book an inspiring call for inclusiveness, courage, equity, and justice as well as a reminder of people’s power to change the world for the better.”
—Booklist

“Heumann’s personality shines throughout. Her voice is witty, persistent, and at times irreverent as she immerses readers in her story.”
—Library Journal

“With an energetic pace and a youthful voice, Ali Stroker narrates disability rights activist Judith Heumann’s memoir. . . . Along with her friend and mentor, the late Ed Roberts, Heumann is a freedom fighter Americans need to know. This audiobook makes getting acquainted a delight.”
—AudioFile Magazine

“Reading this memoir is like sitting down with a good friend and talking for hours, as self-described extrovert Heumann tells powerful and engaging stories from the frontlines of the disability civil rights movement.”
—Health Affairs

“A moving chronicle of social change, Being Heumann will restore your hope in our democracy and the power of our shared humanity.“
—Darren Walker, president, Ford Foundation

“Judy’s advocacy for disability rights began as a fight for her own future and then, as a leader of the movement, spanned the nation and the globe. As secretary of state, I relied on Judy’s insights, knowledge, sass, and wit to elevate advocacy for disability rights in our diplomacy. This important book will help ensure that every person gets a chance to live up to their full potential and will always have a place at the table.”
—Hillary Clinton

“It’s one of the ironies of American life that the one category into which almost all of us will fit at some time in our lives—people with disabilities—is often the last on the list of included groups in this country. . . . I met Judy Heumann almost four decades ago, and her writing, activist skills, and kindness helped me to see this simple truth. Her life story as an activist will enlighten readers everywhere.”
—Gloria Steinem

“Judy’s vision of a society that embraces all aspects of the human condition and where we face adversity with wisdom is truly transformative. . . . All who read her book will be better for it.”
—Sheryl Sandberg, COO of Facebook, author of Lean In

“Judy’s story has shaken me to the core. For the first time, I see myself in someone else. Her fierce advocacy and work changing the laws around disability rights have undeniably paved the way for me to achieve what I have today. . . . A must-read.”
—Ali Stroker, Tony Award–winning actress

“A marvelous memoir by a disability hero who has paved the way for many of us. Full of fascinating stories from the disability rights movement, this book will guide future leaders as we work toward a barrier-free world.”
—Haben Girma, author of the bestseller Haben: The Deafblind Woman Who Conquered Harvard Law

“Being Heumann changed me. This clear-eyed, gripping book is necessary reading for anyone in a body. Judy Heumann is a true heroine: practical, courageous, and totally badass.”
—Sharon Guskin, author of The Forgetting Time

“Full of stories of triumph, love, and total badassery, Being Heumann is a look into a world and moment in history that very few know or appreciate. You don’t have to have a disability to completely relate to Judy’s story. Haven’t all of us been dismissed by others at some point in our lives? Readers will finish this book with a whole new perspective on people with disabilities and on their own lives too. Judy doesn’t just believe in the power of community and the potential of democracy to deliver equality and justice—she and her many friends and allies set out to prove, against all odds, that it is true. Their epic struggle to achieve civil rights protections for people with disabilities has remade our world, whether we realize it or not. Intimate and engrossing, this book is a profound gift. It should be read and cherished by all, as both an unforgettable portrait of one of our greatest activists and a road map for how to build a more just and inclusive world.”
—Nicole Newnham and Jim LeBrecht, directors of Crip Camp

“For everyone who cares about human rights around the world, Judith Heumann’s moving story and message of belonging is also a powerful call to action. A must read.”
—Yetnebersh Nigussie, disability rights activist

“If you’re searching for an excellent primer on the disability justice movement or a firsthand account of the power of the collective voice, you’ll want to pick up this book!”
—Jey Ehrenhalt, Teaching Tolerance School-Based Programming and Grants Manager