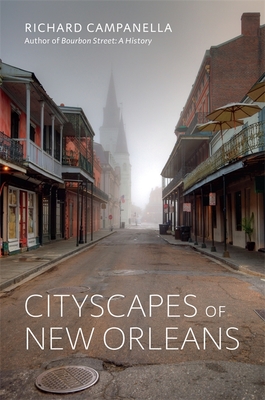 Exploring the Crescent City from the ground up, Richard Campanella takes us on a winding journey toward explaining the city's distinct urbanism and eccentricities. In Cityscapes of New Orleans, Campanella--a historical geographer and professor at Tulane University--reveals the why behind the where, delving into the historical and cultural forces that have shaped the spaces of New Orleans for over three centuries.

For Campanella, every bewildering street grid and linguistic quirk has a story to tell about the landscape of Louisiana and the geography of its bestknown city. Cityscapes of New Orleans starts with an examination of neighborhoods, from the origins of faubourgs and wards to the impact of the slave trade on patterns of residence. Campanella explains how fragments of New Orleans streets continue to elude Google Maps and why humble Creole cottages sit alongside massive Greek Revival mansions. He considers the roles of modern urban planning, environmentalism, and preservation, all of which continue to influence the layout of the city and its suburbs. In the book's final section, Campanella explores the impact of natural disasters as well-known as Hurricane Katrina and as unfamiliar as "Sauv 's Crevasse," an 1849 levee break that flooded over two hundred city blocks. Cityscapes of New Orleans offers a wealth of perspectives for uninitiated visitors and transplanted citizens still confounded by terms like "neutral ground," as well as native-born New Orleanians trying to understand the Canal Street Sinkhole. Campanella shows us a vibrant metropolis with stories around every corner.

Richard Campanella, a geographer with the Tulane School of Architecture, is the author of eight books about New Orleans, including Bourbon Street: A History, Bienville's Dilemma, and Geographies of New Orleans. A two-time winner of the Louisiana Endowment for the Humanities Book of the Year Award, Campanella has also received the Louisiana Library Association's Literary Award, the Williams Prize for Louisiana History, and the Monroe Fellowship from Tulane's New Orleans Center for the Gulf South.