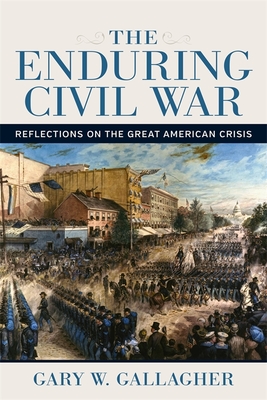 In the seventy-three succinct essays gathered in The Enduring Civil War, celebrated historian Gary W. Gallagher highlights the complexity and richness of the war, from its origins to its memory, as topics for study, contemplation, and dispute. He places contemporary understanding of the Civil War, both academic and general, in conversation with testimony from those in the Union and the Confederacy who experienced and described it, investigating how mid-nineteenth-century perceptions align with, or deviate from, current ideas regarding the origins, conduct, and aftermath of the war. The tension between history and memory forms a theme throughout the essays, underscoring how later perceptions about the war often took precedence over historical reality in the minds of many Americans.

The array of topics Gallagher addresses is striking. He examines notable books and authors, both Union and Confederate, military and civilian, famous and lesser known. He discusses historians who, though their names have receded with time, produced works that remain pertinent in terms of analysis or information. He comments on conventional interpretations of events and personalities, challenging, among other things, commonly held notions about Gettysburg and Vicksburg as decisive turning points, Ulysses S. Grant as a general who profligately wasted Union manpower, the Gettysburg Address as a watershed that turned the war from a fight for Union into one for Union and emancipation, and Robert E. Lee as an old-fashioned general ill-suited to waging a modern mid-nineteenth-century war. Gallagher interrogates recent scholarly trends on the evolving nature of Civil War studies, addressing crucial questions about chronology, history, memory, and the new revisionist literature. The format of this provocative and timely collection lends itself to sampling, and readers might start in any of the subject groupings and go where their interests take them.

Gary W. Gallagher is the John L. Nau III Professor in the History of the American Civil War Emeritus at the University of Virginia. He is the author or editor of more than forty books on the Civil War and its memory.