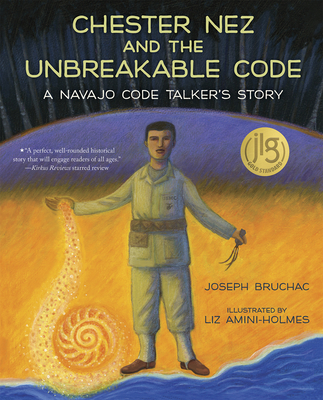 As a young Navajo boy, Chester Nez had to leave the reservation and attend boarding school, where he was taught that his native language and culture were useless. But Chester refused to give up his heritage. Years later, during World War II, Chester—and other Navajo men like him—was recruited by the US Marines to use the Navajo language to create an unbreakable military code. Suddenly the language he had been told to forget was needed to fight a war. This powerful picture book biography contains backmatter including a timeline and a portion of the Navajo code, and also depicts the life of an original Navajo code talker while capturing the importance of heritage.

As a writer and storyteller, Joseph Bruchac often draws on his Native American (Abenaki) ancestry. Joseph is the author of over 130 books for young readers and adults, including Code Talker: A Novel About the Navajo Marines of World War Two. He lives in New York. Liz Amini-Holmes holds a bachelor's of fine arts degree in illustration from the Academy of Art University and the University of San Francisco. She has illustrated other books for children including Fatty Legs, Miracle, and A Stranger at Home. She lives in California.

"Bruchac distills his extensive knowledge about the Navajo code talkers in this complex biography for young readers." —Booklist

"Bruchac movingly draws a parallel between the trauma of indigenous boarding schools and war. Amini-Holmes’s paintings capture the nightmarish atmosphere of both." —Publishers Weekly