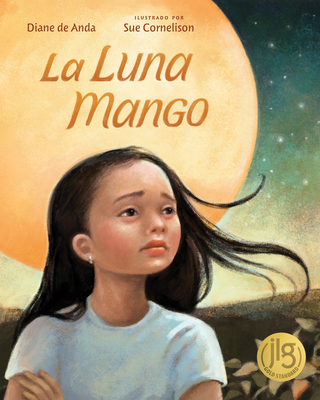 
Email or call for price.
When a father is taken away from his family and faces deportation, his family is left to grieve and wonder what comes next. Maricela, Manual, and their mother face the many challenges and changes created by their father's absence. A new home, missed soccer games and birthday parties, and emptiness are now day-to-day norms. But Maricela learns that her love for her father is sustained even though he is no longer part of her daily life.
Cuando un padre es apartado de su familia y enfrenta la deportación, su familia se queda sufriendo con el duelo y deseando saber qué sucederá después. Maricela, Manuel y su madre enfrentan los muchos desafíos al tener que su vida es cambiada completamente por la ausencia de su padre y su esposo. Mudarse a una casa nueva, juegos de fútbol perdidos, fiestas de cumpleaños, y el vacío son ahora la norma del día a día. La Luna Mango muestra cómo es la vida desde la perspectiva de un niño/a cuando un padre es deportado, y las realidades desgarradoras que tienen que enfrentar, pero Maricela descubre que su amor por su padre se mantiene a pesar de que ya no es parte de su vida diaria.
Diane de Anda, a third generation Latina, is a retired professor in the Department of Social Welfare at UCLA. Author of several children’s books featuring Latino families, she has five more books due to be published in 2018 and 2019. Sue Cornelison is the author and illustrator of many children's books. She relishes her time with family, coaching her tumbling and trampoline team, and playing wildlife photographer when she isn't illustrating.
"Ten-year-old Maricela stares at the mango-colored moon, reminiscing on the many nights during which she and her father did the same—before his deportation. Social worker and scholar DeAnda frankly presents simple responses to the questions immigrant children might have after being separated from their parents. This Spanish version of the simultaneous English publication is sometimes awkward in its phrasing, but overall this is a much-needed text for many libraries serving families in similar situations. Though the book covers a heavy subject, Cornelison’s evocative, light-filled spreads add a hint of hope, even while depicting how Maricela’s dad’s plight affects the whole family—through finances, living situations, school performance. Touching and timely, this is a strong choice for picture-book shelves, especially where bibliotherapy is needed." — Booklist

"A realistic portrayal of a family torn apart. Ten-year-old Maricela's mama picks her up from school on the day everything changes. She tells Maricela and her younger brother that their ‘papi won't be coming home for a while.’ Readers learn through simple prose that Maricela's undocumented father is being held in a detention center while he awaits deportation to an unnamed but ‘dangerous’ country. Every aspect of Maricela's young life is affected, from her now-coachless soccer practice to her after-school routine. She narrates the story with a sense of grief and honesty true to a child's understanding of a complicated and devastating situation. Cornelison's soft, impressionistic illustrations depict the all-Latinx family with light brown skin and straight, black hair and convey the overwhelming loss and sadness felt by a child longing for an absent parent. The unsmiling characters in the story feel authentic to the heaviness of this experience. Despite their separation, Maricela focuses on ways she can stay connected to her papi, through handwritten notes and especially looking up at their same mango moon. Author De Anda honors the real challenge that many children face when a parent is deported and reminds them that it's ‘all right…to cry.’ Available in both Spanish and English, this story validates a heartbreaking experience." — Kirkus Reviews