The Night Thoreau Spent in Jail: A Play (Paperback) 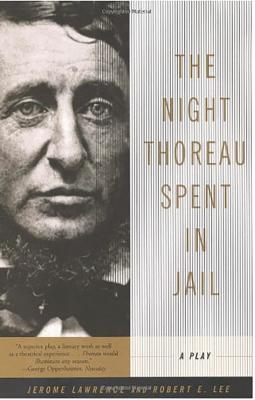 A reissue of a now classic American drama.

If the law is of such a nature that it requires you to be an agent of injustice to another, then I say, break the law." So wrote the young Henry David Thoreau in 1849. Three years earlier, Thoreau had put his belief into action and refused to pay taxes because of the United States government's involvement in the Mexican War, which Thoreau firmly believed was unjust. For his daring and unprecedented act of protest, he was thrown in jail. The Night Thoreau Spent in Jail is a celebrated dramatic presentation of this famous act of civil disobedience and its consequences. Its poignant, lively, and accessible scenes offer a compelling exploration of Thoreau's philosophy and life.

Jerome Lawrence, formerly master playwright at New York University, and Robert E. Lee (1918-1984), who was a professor of playwriting at UCLA, collaborated on thirteen plays, including Inherit the Wind and Auntie Mame.

Robert E. Lee contributed to The Night Thoreau Spent in Jail from Farrar, Straus and Giroux.

“A superior play, a literary work as well as a theatrical experience. Thoreau would illuminate any season.” —George Oppenheimer, Newsday

“There is a great deal to enjoy in this play.” —Clive Barnes, The New York Times