For the Soul of Mankind: The United States, the Soviet Union, and the Cold War (Hardcover) 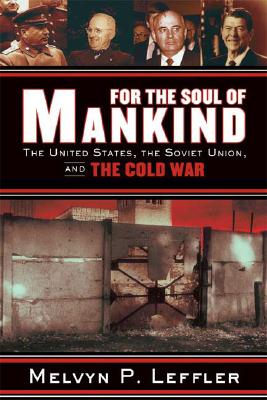 To the amazement of the public, pundits, and even the policymakers themselves, the ideological and political conflict that had endangered the world for half a century came to an end in 1990. How did that happen? What caused the cold war in the first place, and why did it last as long as it did?

The distinguished historian Melvyn P. Leffler homes in on four crucial episodes when American and Soviet leaders considered modulating, avoiding, or ending hostilities and asks why they failed: Stalin and Truman devising new policies after 1945; Malenkov and Eisenhower exploring the chance for peace after Stalin’s death in 1953; Kennedy, Khrushchev, and LBJ trying to reduce tensions after the Cuban Missile Crisis of 1962; and Brezhnev and Carter aiming to sustain détente after the Helsinki Conference of 1975. All these leaders glimpsed possibilities for peace, yet they allowed ideologies, political pressures, the expectations of allies and clients, the dynamics of the international system, and their own fearful memories to trap them in a cycle of hostility that seemed to have no end.

Leffler’s important book illuminates how Reagan, Bush, and, above all, Gorbachev finally extricated themselves from the policies and mind-sets that had imprisoned their predecessors, and were able to reconfigure Soviet-American relations after decades of confrontation.

Melvyn P. Leffler, Stettinius Professor of American History at the University of Virginia, is the author "The Specter of Communism "(H&W, 1994) and "A Preponderance of Power," which won the Bancroft Prize in 1992." "He lives in Charlottesville.

"With a keen eye for telling detail, a concern for the choices of individual leaders, and careful judgments, Leffler generates a narrative that carries the reader along as it develops important new ideas. This landmark study transcends many of our standard arguments about the Cold War to focus on what it was really about. Driving much of the maneuvering for security and advantage was the struggle over which political system could meet people's needs and produce a better society."  --Robert Jervis, Columbia University

"This is a lively and very wise book on the Cold War from its beginning to its end. Concentrating on five critical intervals in the history of Soviet-American rivalry, Melvyn P. Leffler, one of the West's leading authorities on U.S. foreign policy, mines a wealth of new sources for this fresh and stimulating analysis of Cold War crises. The portraits of Cold War leaders, both Soviet and American, are convincingly and elegantly drawn. As illustrated by Leffler, their travails and successes demonstrate how important leadership is in maintaining peace in an unstable world."  --Norman M. Naimark, Stanford University "Melvyn Leffler does an excellent job of surveying key phases of the Cold War. His analytical perspective, emphasizing both structure and agency, is illuminating throughout. The book is sophisticated and erudite but also engagingly written and lively. For the Soul of Mankind will appeal to general readers as well as to experts and university students, and will be a standard text in classes dealing with the Cold War." --Mark Kramer, Harvard University "There will never be a last word on why the Cold War began and why it ended, but Mel Leffler's book is certainly the latest word--based on accumulated American and now Soviet sources. Leffler avoids the pitfalls of the older revisionism, which blamed the U.S. for the conflict, and of Cold War triumphalism, which saw the Soviet Union's collapse as testimony to American steadfastness in the face of Soviet obduracy. His is a story of two nations whose leaders, haunted by very different fears of a recurrent past, at crucial junctures perpetuated the conflict and made it insoluble. The Cold War ended, finally, when two remarkable men, Mikhail Gorbachev and Ronald Reagan, were able to recognize what was unfounded in their fears of each other."   --John B. Judis, author of The Folly of Empire Praise for The Specter of Communism: "[Leffler] probes the ideological, political, and economic underpinnings of U.S. foreign policy toward the Soviet Union from 1917 to 1953 with laser-sharp intelligence, bringing more understanding to the sources of U.S. conduct of world affairs than any comparable volume." --Martin J. Sherwin, Tufts University Praise for A Preponderance of Power: "Indefatigably researched: there does not appear to be a relevant archival collection, official or unofficial, that Leffler has not seen. And, most important, it is an intellectually honest work . . . This is, in short, the best book anyone has yet written on the United States and the origins of the Cold War."--John Lewis Gaddis, The Atlantic Monthly "Brilliant . . . The author appears to have read every national security document that was generated by the White House and the State and War departments . . . For sheer comprehensiveness and thorough investigation, this volume is unmatched. It is also miraculously literate, thought-provoking and quite surprising in its line of argument." --Carolyn Eisenberg, The Nation