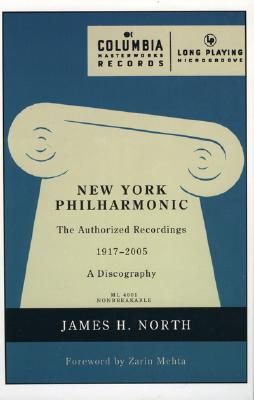 The intent of any discography is comprehensiveness, aiming to include every recording within its chosen area, and to list all the important details of each. The discography, New York Philharmonic: The Authorized Recordings, 1917-2005 is no exception. Author James H. North has compiled more than 1500 commercial recordings made by the New York Philharmonic from 1917 to 2005. A fifteen-page Introduction serves as a general history of New York Philharmonic recordings, discussing issues such as the importance of recordings, the orchestra's relationships with various recording companies, the venues used, recordings of interest which were not made (and why they were not), and the record-labeling systems used by Columbia/CBS/Sony, the Philharmonic's long-term business partner. The entries are presented in chronological order of recording sessions and contain important details such as music played, performers, session dates and venues, recording companies and producers, first release dates, and all issues of the recording, including 78- and 45-rpm discs, Long-Playing records, and Compact Discs. Three appendixes catalog the entries by composer, conductor, and soloists respectively, referring the reader to the appropriate entry in the main listing. Two additional appendixes further illustrate the New York Philharmonic's history, one by describing the 78-rpm records made for class use by Ginn and Company during the mid-1920s, the other listing the twenty-five Young People's Concerts, written and conducted by Leonard Bernstein and broadcast worldwide on television from 1958 to 1970, now available on VHS and DVD.

James H. North is a free-lance journalist and music critic--writing for such publications as Fanfare and Classic Record Collector--and has attended New York Philharmonic concerts and listened to their recordings for over fifty years.