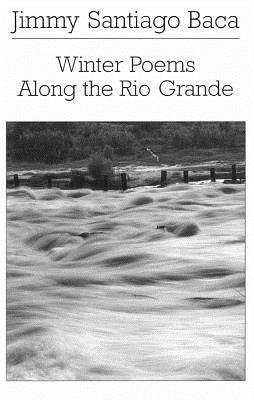 A romantic and a populist, Jimmy Santiago Baca celebrates nature and creativity: the power of "becoming more the river than myself" in Winter Poems Along the Rio Grande. These poems are an expansive meditation on Baca's spiritual life, punctuated always with his feetrepeatedly, rhythmicallyon the ground as he runs every morning along the river. Baca contemplates his old life, his new love, his family and friends, those living and those dead, injustices and victories, and Chicano culture. As Denise Levertov remarked, Baca "writes with unconcealed passion" and "manifests both an intense lyricism and that transformative vision which perceives the mythical and archetypal significance of life events."

Jimmy Santiago Baca was born in Santa Fe, New Mexico, in 1952. His parents abandoned him at the age of two, and he lived with his grandmother for several years before being placed in an orphanage. A runaway at age thirteen, Baca was sentenced to five years in a maximum security prison at the age of twenty-one for drug offenses. It was in prison that he learned to read and write and began to compose poetry. His book Martín & Meditations on the South Valley, a pair of long narrative poems, won an American Book Award in 1988. In addition to his poetry collections and stories, Baca wrote the screenplay for the movie Bound by Honor, which was released by Hollywood Pictures in 1993.