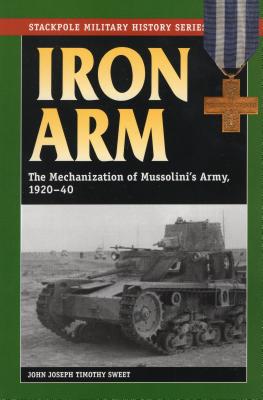 By John Joseph Timothy Sweet
$16.95
Email or call for price.

- A detailed study of Italy's long-ignored tank force - Explores the intersection of technology, war, and society in Mussolini's Italy - Second only to Germany in number of tank divisions, first to create an armored corps Though overshadowed by Germany's more famous Afrika Korps, Italian tanks formed a large part of the Axis armored force that the Allies confronted--and ultimately defeated--in North Africa in the early years of World War II. Those tanks were the product of two decades of debate and development as the Italian military struggled to produce a modern, mechanized army in the aftermath of World War I. For a time, Italy stood near the front of the world's tank forces--but once war came, Mussolini's iron arm failed as an effective military force. This is the story of its rise and fall.

The late John Joseph Timothy Sweet studied under Sir Basil Liddell Hart and earned a doctorate from Kansas State University. A native of California, Sweet was killed on active duty with the U.S. Army. His other book is Mounting the Threat (0-89141-026-0).