The Border: Journeys Along the U.S.-Mexico Border, the World's Most Consequential Divide (Paperback) 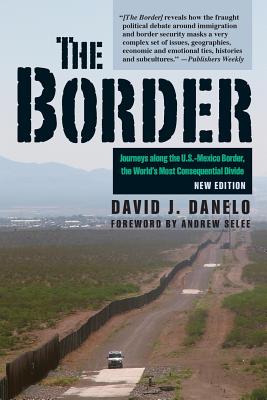 David Danelo spent three months traveling the 1,952 miles that separate the United States and Mexico--a journey that took him across four states and two countries through a world of rivers and canals, mountains and deserts, highways and dirt roads, fences and border towns. Here the border isn't just an abstraction thrown around in political debates in Washington; it's a physical reality, infinitely more complex than most politicians believe. Danelo's investigative report about a complex, longstanding debate that became a central issue of the 2016 presidential race examines the border in human terms through a cast of colorful characters. As topical today as it was when Danelo made his trek, this revised and updated edition asks and answers the core questions: Should we close the border? Is a fence or wall the answer? Is the U.S. government capable of fully securing the border?

David J. Danelo is a graduate of the U.S. Naval Academy and a Marine Corps veteran of the Iraq War. He is a Senior Fellow at the Global Initiative Against Transnational Organized Crime, has conducted field research for the Departments of State, Defense, and Homeland Security, and in 2011-12, he served as executive director of policy and planning for U.S. Customs and Border Protection. His work has appeared in the Los Angeles Times, the New York Post, and Parade. His has also written the book Blood Stripes. He lives in West Texas. Andrew Selee is president of the Migration Policy Institute and past executive vice president of the Woodrow Wilson Center. He has written for the Wall Street Journal and Washington Post. His most recent book is Vanishing Frontiers: The Forces Driving Mexico and the United States Together.