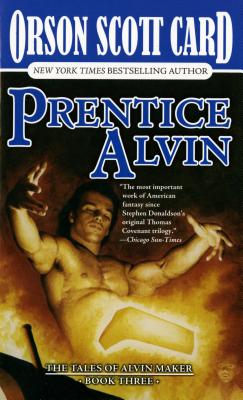 By Orson Scott Card
$7.99
Email or call for price.

This is book number 3 in the Alvin Maker series.

The Tales of Alvin Maker series from bestselling author Orson Scott Card continues in volume three, Prentice Alvin. Young Alvin returns to the town of his birth, and begins his apprenticeship with Makepeace Smith, committing seven years of his life in exchange for the skills and knowledge of a blacksmith. But Alvin must also learn to control and use his own talent, that of a Maker, else his destiny will be unfulfilled.

“A tribute to the art of storytelling. . . highly recommended.” —Library Journal

“Card has uncovered a rich vein of folklore and magic here, to which his assured handling of old time religion and manifest love of children is admirably suited: an appealing and intriguing effort.” —Kirkus Reviews

“A beguiling book. . . robust but reflective blend of folktale, history, parable and personal testimony, pioneer narrative. The series promises to be a story of deep delight.” —Publishers Weekly