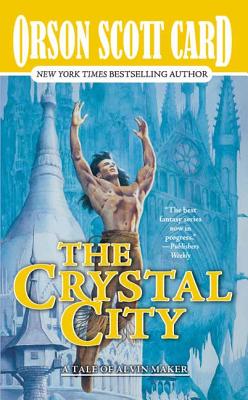 This is book number 6 in the Alvin Maker series.

Using the lore and the folk-magic of the men and women who settled North America, Orson Scott Card has created an alternate world where magic works, and where that magic has colored the entire history of the colonies. Charms and beseechings, hexes and potions, all have a place in the lives of the people of this world. Dowsers find water, the second sight warns of dangers to come, and a torch can read a person's future---or their heart.
In this world where "knacks" abound, Alvin, the seventh son of a seventh son, is a very special man indeed. He's a Maker; he has the knack of understanding how things are put together, how to create them, repair them, keep them whole, or tear them down. He can heal hearts as well as bones, he build a house, he can calm the waters or blow up a storm. And he can teach his knack to others, to the measure of their own talent.

Alvin has been trying to avert the terrible war that his wife, Peggy, a torch of extraordinary power, has seen down the life-lines of every American. Now she has sent him down the Mizzippy to the city of New Orleans, or Nueva Barcelona as they call it under Spanish occupation. Alvin doesn't know exactly why he's there, but when he and his brother-in-law, Arthur Stuart, find lodgings with a family of abolitionists who know Peggy, he suspects he'll find out soon.

But Nueva Barcelona is about to experience a plague, and Alvin's efforts to protect his friends by keeping them healthy will create more danger than he could ever have suspected. And in saving the poor people of the city, Alvin will be put to the greatest test of his life---a test that will draw on all his power. For the time has come for him to turn to his old friend Tenskwa-Tawa, the Red Prophet who controls the lands to the west of the Mizzippy. Now Alvin must take the first steps on the road to the Crystal City that was shown to him in a vision so long ago.

Orson Scott Card is best known for his science fiction novel Ender's Game and its many sequels that expand the Ender Universe into the far future and the near past. Those books are organized into the Ender Quintet, the five books that chronicle the life of Ender Wiggin; the Shadow Series, that follows on the novel Ender's Shadow and are set on Earth; and the Formic Wars series, written with co-author Aaron Johnston, that tells of the terrible first contact between humans and the alien "Buggers." Card has been a working writer since the 1970s. Beginning with dozens of plays and musical comedies produced in the 1960s and 70s, Card's first published fiction appeared in 1977 -- the short story "Gert Fram" in the July issue of The Ensign, and the novelette version of "Ender's Game" in the August issue of Analog. The novel-length version of Ender's Game, published in 1984 and continuously in print since then, became the basis of the 2013 film, starring Asa Butterfield, Harrison Ford, Ben Kingsley, Hailee Steinfeld, Viola Davis, and Abigail Breslin. Card was born in Washington state, and grew up in California, Arizona, and Utah. He served a mission for the LDS Church in Brazil in the early 1970s. Besides his writing, he runs occasional writers' workshops and directs plays. He frequently teaches writing and literature courses at Southern Virginia University.
He is the author many sf and fantasy novels, including the American frontier fantasy series "The Tales of Alvin Maker" (beginning with Seventh Son), There are also stand-alone science fiction and fantasy novels like Pastwatch and Hart's Hope. He has collaborated with his daughter Emily Card on a manga series, Laddertop. He has also written contemporary thrillers like Empire and historical novels like the monumental Saints and the religious novels Sarah and Rachel and Leah. Card's recent work includes the Mithermages books (Lost Gate, Gate Thief), contemporary magical fantasy for readers both young and old. Card lives in Greensboro, North Carolina, with his wife, Kristine Allen Card, He and Kristine are the parents of five children and several grandchildren.

“Card creates a solid episode in what is perhaps his most interesting ongoing series.” —Bookpage on The Crystal City

“By mixing real settings, people, and situations with his own brand of characterization and biblical metaphor, the author has created an early America as it might have been if magic had played a part in its development.” —Rocky Mountain News on The Crystal City