The Shadow of Ararat: Book One of 'The Oath of Empire' (Mass Market Paperback) 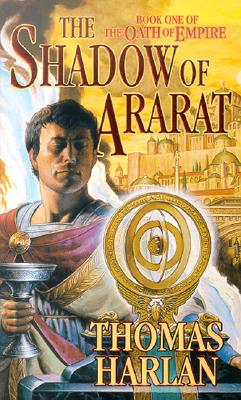 By Thomas Harlan
$6.99
Email or call for price.

In what would be A.D. 600 in our history, the Roman Empire still stands, supported by the twin pillars of the Legions and Thaumaturges of Rome. Now the Emperor of the West, the Augustus Galen Atreus, will come to the aid of the Emperor of the East, the Augustus Heraclius, to lift the siege of Constantinople and carry a great war to the very doorstep of the Shahanshah of Persia. It is a war that will be fought with armies both conventional and magical, with bright swords and the darkest necromantic sorceries.

Thomas Harlan is the author of the highly regarded "Oath of Empire" fantasy series, as well as being an internationally-known game designer. He lives in Salem, Oregon.

"What lies in the shadow of Ararat, that mountain far to the east of Rome? I'll leave that for you to discover, along with the multitude of fascinations in this extraordinary debut." --Locus

"Vivid, clever, and complex--war and treachery in a Rome where magic works!" --David Drake

"Harlan's command of military strategy and tactics is thorough and vividly realized. When Roman and Persian armies clash in these pages, we can feel the dust sting our eyes and the ground shake beneath the rush of cavalry charges....The Shadow of Ararat is not only an ambitious debut novel, but a first-rate alternate history by any standard." --Amazing Stories

"Thomas Harlan takes on the Roman Empire and wins! High and low, male and female, nice and supremely nasty...it's all here in intriguing detail--including swift flashes of humor and a well-grounded feel for everyday life, whether in the bedroom or on the battlefield." --Ellen Kushner