Fire in the Blood: A Novel (Hardcover) 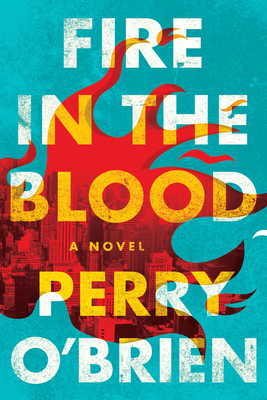 “A tremendously compelling debut of rare skill” (Phil Klay, author of Redeployment) about a soldier who goes AWOL from Afghanistan and returns home to unravel the mystery of his wife’s death.

When Coop—a U.S. Army paratrooper serving in Afghanistan—is called urgently to his Captain’s office, he fears he’s headed for a court martial. Coop has been keeping a terrible secret from his fellow soldiers, and worries he’s been discovered. Instead, his life is devastated in a different way: his wife, Kay, has been killed in a hit-and-run.

Given a brief leave to fly back to New York and attend to Kay’s affairs, Coop is increasingly disturbed by the suspicious circumstances of his wife’s death. He decides to go AWOL, using his military training to uncover the real story behind Kay’s fatal accident. As he circles in on the truth, Coop must distinguish ally from enemy among a cast of players in the Bronx underworld: Albanian heroin smugglers, shady cops, corrupt rehab doctors, and his wife’s family, a powerful clan of financial elites. Navigating this new battlefield, he’ll have to find justice for Kay while also seeking his own redemption.

Humming with mystery and grief, Fire in the Blood is a compulsively readable thriller about the wars we fight, whether overseas, in our city streets, or in the depths of our own hearts.

Perry O’Brien served in Afghanistan with the 82nd Airborne but was able to obtain an honorable discharge as a conscientious objector. His fiction has been featured in the war anthology Fire and Forget, and his nonfiction has been published by The New York Times and San Francisco Chronicle. He lives in New York City and works as a labor organizer.

“With Fire in the Blood’s close observations of the psychology of men and violence, of the wide gulfs between New York City’s social classes that can shrink to nothing in an instant, and its brilliant inversion of the classic mystery plot, Perry O’Brien has written a tremendously compelling debut of rare skill.”—Phil Klay, author of Redeployment, winner of the National Book Award

“Perry O’Brien’s Fire in the Blood is the opening blast of what I expect will be a long, strong career in American fiction. Through all the twists and turns of this riveting, fast-paced novel, O’Brien’s sure grasp of human experience never falters. It’s all here, the heartbreak and hoping, the fear and confusion, the rare moments of mercy and meaning. A powerful debut, and a harbinger of more good things to come.”—Ben Fountain, author of Billy Lynn’s Long Halftime Walk, winner of the National Book Critics Circle Award

“Before you read Fire in the Blood—Perry O’Brien’s tightly woven, fast-paced novel of crime and revenge—let me warn you that at some point you will not only wish you had written it, but also that you had the money to buy the film rights. It is that damn good.”—Donald Ray Pollock, author of The Heavenly Table and The Devil All the Time