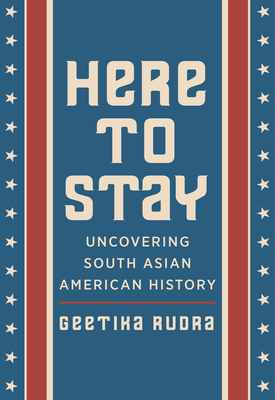 Today, South Asians are a rapidly growing demographic in the United States, comprising nearly 2 percent of the population. But there was a time in the not-too-distant past when the United States was far less hospitable to South Asian immigrants. In fact, until 1952, only white immigrants could become naturalized American citizens. Yet in the first half of the twentieth century, many states still had thriving communities of South Asians.

In Here to Stay, Geetika Rudra, a second-generation Indian immigrant and American history buff, takes readers on a journey across the country to unearth the little-known histories of earlier generations of South Asian Americans. She visits storied sites such as Oregon’s “Hindoo Alley,” home to many lumber workers at the turn of the century, and Angel Island, California’s immigration hub. She also introduces readers to such inspiring figures as Bhagat Singh Thind, an immigrant who had enlisted in the U.S. Army to serve his adopted country in World War I, but who was later denied citizenship and took his case all the way to the U.S. Supreme Court. In turns both serious and joyful, this book vividly reveals how South Asians have always been a vital part of the American tapestry.

GEETIKA RUDRA is an amateur history buff with a deep love of American history. She is the daughter of Indian immigrants from Queens, New York, and she lives in Manhattan with her book collection. Find her on Instagram or Twitter at @GGGeetika.

"Here to Stay reflects a great deal of primary source research that the author has conducted along with a compelling narrative that braids aspects of her life story into the historic narrative of America’s whiteness as well as the biographies of A.K. Mozumbar, Bhagat Singh Thind, Kala Bagai, and many other early Indian emigres. This book makes a strong contribution to South Asian American Studies scholarship."
— Himanee Gupta-Carlson