A Briefe and True Report of the New Found Land of Virginia: The 1590 Theodor de Bry Latin Edition (Paperback) 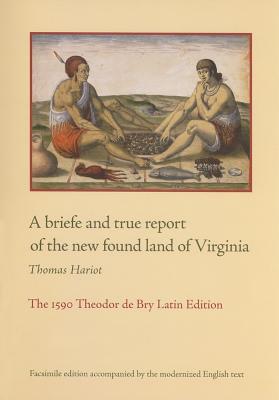 For more than 400 years, scholars from an array of disciplines have recognized Theodor de Bry's 1590 edition of Thomas Hariot's A briefe and true report of the new found land of Virginia as a book whose influence shaped contemporary European perceptions of North America, as well as subsequent research on that period for centuries to come.

The book, upon which the present volume is based, is from the collections of the Library at the Mariners' Museum. It is extremely rare, containing hand-colored illustrations from the period, and is one of only three recorded copies with colored plates. This complete facsimile edition presents de Bry's exceptional engravings, based on John White's sixteenth-century watercolors, in their original hand-colored form. The book is available in paperback and as a limited cloth edition of two hundred numbered copies. Both editions are printed by the award-winning Stinehour Press.

As the first volume in de Bry's celebrated Grand Voyages, a series of publications chronicling many of the earliest expeditions to the Americas, this book, which incorporates a 1588 text by Thomas Hariot, was illustrated and published in four languages. It became for many Europeans their first glimpse of the American continent. Accompanying the Latin facsimile is an English text. The first section is modernized from earlier versions of the English, and the second part, which accompanies the plates, is newly translated from the original Latin.

In addition to a valuable introduction, the book includes two illuminating essays. The first, by Karen Ordahl Kupperman, examines the early American settlement and tells how a collaboration between the writer and mathematician Thomas Hariot and the artist John White (later governor of the Roanoke Colony) evolved into a rich study not only of English colonial life but of the Indian culture and the natural resources of the region. The second essay, by Peter Stallybrass, uncovers new information in the much studied plates and presents an intriguing theory about the creation and importance of the engravings.

This facsimile edition will appeal to students and scholars in several fields of study, from American history and ethnography to fine arts and the history of the book, and will provide the reader with the best illustration of the New World as it was first presented to the Old.

Published for the Library at the Mariner's Museum

Susan Berg, former Vice President and Director of the Library at the Mariner's Museum, is author of Eighteenth-Century Williamsburg Imprints. Karen Kupperman is Silver Professor of History at New York University and author of Indians and English: Facing Off in Early America. Peter Stallybrass is Annenberg Professor of Humanities at the University of Pennsylvania and the coauthor of Benjamin Franklin, Writer and Printer.