Unsettling Nature: Ecology, Phenomenology, and the Settler Colonial Imagination (Under the Sign of Nature) (Hardcover) 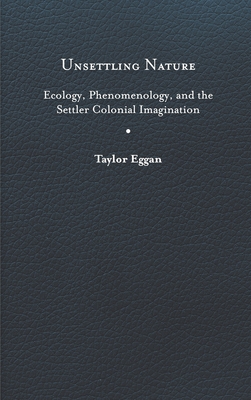 The German poet and mystic Novalis once identified philosophy as a form of homesickness. Centuries later, as modernity's displacements continue to intensify, we feel Novalis's homesickness more than ever. Yet nowhere has a longing for home flourished more than in contemporary environmental thinking, and particularly in eco-phenomenology. If only we can reestablish our sense of material enmeshment in nature, so the logic goes, we might reverse the degradation we humans have wrought and once again dwell in the nearness of our own being.

Unsettling Nature demonstrates the trouble with such ecological homecoming narratives, which bear a close resemblance to narratives of settler colonial homemaking. Arguing that the Heideggerian strain of eco-phenomenology produces uncanny effects in settler colonial contexts, Taylor Eggan reads instances of nature's defamiliarization not merely as psychological phenomena but also as symptoms of the repressed consciousness of coloniality. The book simultaneously critiques Heidegger's phenomenology and brings it forward through chapters on Willa Cather, D. H. Lawrence, Olive Schreiner, Doris Lessing, and J. M. Coetzee. Suggesting that alienation may in fact be "natural" to the human condition, Unsettling Nature concludes with a proposal to transform eco-phenomenology into "exo-phenomenology"-an experiential mode that engages deeply with the alterity of others and with the self as its own Other.