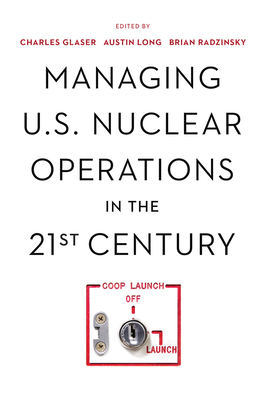 Exploring how the United States manages its still-powerful nuclear arsenal

Arms control agreements and the end of the Cold War have made the prospect of nuclear war a distant fear for the general public. But the United States and its principal rivals--China and Russia--still maintain sizable arsenals of nuclear weapons, along with the systems for managing them and using them if that terrible day ever comes.

Managing U.S. Nuclear Operations in the 21st Century focuses on how theories and policies are put into practice in managing nuclear forces in the United States.

It addresses such questions as: What have been the guiding priorities of U.S. nuclear strategy since the end of the Cold War? What nuclear attack options would the president have during a war? How are these war plans developed and reviewed by civilian and military leaders? How would presidential orders be conveyed to the uniformed men and women who are entrusted with U.S. nuclear weapons systems? And are these communications systems and supporting capabilities vulnerable to disruption or attack?

The answers to such questions depend on the process by which national strategy for nuclear deterrence, developed by civilian leaders, is converted into nuclear war plans and the entire range of procedures for implementing those plans if necessary.

The chapter authors have extensive experience in government, the armed forces, and the analytic community. Drawing on their firsthand knowledge, as well as the public record, they provide unique, authoritative accounts of how the United States manages it nuclear forces today.

This book will be of interest to the national security community, particularly younger experts who did not grow up in the nuclear-centric milieu of the Cold War. Any national security analyst, professional, or government staffer seeking to learn more about nuclear modernization policy and the U.S. nuclear arsenal should be interested in this book. It should also be of interest to professors and students who want a deep understanding of U.S. nuclear policy.

Charles Glaser is a Professor of Political Science and International Affairs at George Washington University, where he codirects the Elliott School's Institute for Security and Conflict Studies. He specializes in international relations theory, nuclear weapons strategy and policy, and U.S. policy toward China. His most recent book is Rational Theory of International Politics (Princeton 2010).Austin Long is Vice Deputy Director for Strategic Stability in the Joint Staff J5 (Strategy, Plans, and Policy). His portfolio includes nuclear, space, missile defense, cyber, information integration, and arms control issues. He received his B.S. from the Georgia Institute of Technology and his Ph.D. from the Massachusetts Institute of Technology.Brian Radzinsky is a postdoctoral research fellow at the Center for Global Search Research at Lawrence Livermore National Laboratory. His work focuses on strategic assessments, nuclear deterrence and emerging technologies. He received a Ph.D. in political science from the George Washington University and a B.A. in political science from Reed College.