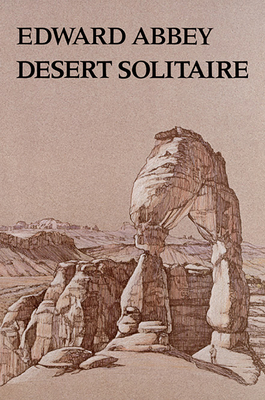 
Usually Ships in 1-5 Days
At last, one of the most popular books on the American West is available once again in hardcover. In celebration of the twentieth anniversary of the publication of Desert Solitaire, the University of Arizona Press is pleased to publish a new edition featuring a new introduction by the author, his definitive corrections to the text, and new illustrations commissioned exclusively for this volume.

Edward Abbey's account of two summers spent in southeastern Utah's canyonlands is surely one of the most enduring works of contemporary American nature writing. In it he tells of his stint as a park ranger at Arches National Monument, of his love for the natural beauty that surrounded him, and of his distaste for the modernizing improvements designed to increase visitation to the park.

"I confess to being a nature lover," admits Abbey more than thirty years after his sojourn in the wilderness. "But I did not mean to be mistaken for a nature writer. I never wanted to be anything but a writer, period." First published in 1968 to "a few brief but not hostile notices," Desert Solitaire quietly sold out of its first printing but eventually developed a loyal enough following in paperback to earn Abbey the "nature writer" label he claims never to have wanted.

Desert Solitaire lives on because it is a work that reflects profound love of nature and a bitter abhorrence of all that would desecrate it. "Abbey is one of our very best writers about wilderness country," observed Wallace Stegner in the Los Angeles Times Book Review; "he is also a gadfly with a stinger like a scorpion." "This book may well seem like a ride on a bucking bronco," added Edwin Way Teale in the New York Times. "It is rough, tough, combative...passionately felt, deeply poetic." But perhaps the spirit of the man, the work, and the circumstances of its writing were best summarized by Larry McMurtry in his review for the Washington Post: "Edward Abbey is the Thoreau of the American West."
Edward Abbey worked for sixteen years as a ranger with the National Park Service and National Forest Service, and is the author of Black Sun, The Monkey Wrench Gang, The Fool's Progress, and more than a dozen other books. He died in 1989.
"A passionately felt, deeply poetic book. It has philosophy. It has humor. It has its share of nerve-tingling adventures . . . set down in a lean, racing prose, in a close-knit style of power and beauty." —New York Times Book Review

"This is a well made and well illustrated book (at last a good hard-back version!), with more than a dozen fine ink drawings....Desert Solitaire deserves such a handsome format." —Bloomsbury Review