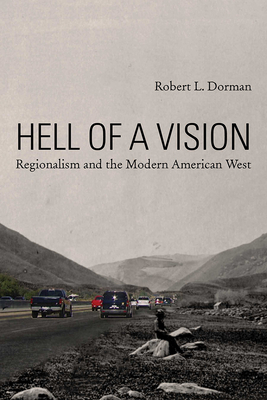 The American West has taken on a rich and evocative array of regional identities since the late nineteenth century. Wilderness wonderland, Hispanic borderland, homesteader’s frontier, cattle kingdom, urban dynamo, Native American homeland. Hell of a Vision explores the evolution of these diverse identities during the twentieth century, revealing how Western regionalism has been defined by generations of people seeking to understand the West’s vast landscapes and varied cultures.

Focusing on the American West from the 1890s up to the present, Dorman provides us with a wide-ranging view of the impact of regionalist ideas in pop culture and diverse fields such as geography, land-use planning, anthropology, journalism, and environmental policy-making.

Going well beyond the realm of literature, Dorman broadens the discussion by examining a unique mix of texts. He looks at major novelists such as Cather, Steinbeck, and Stegner, as well as leading Native American writers. But he also analyzes a variety of nonliterary sources in his book, such as government reports, planning documents, and environmental impact studies.

Hell of a Vision is a compelling journey through the modern history of the American West—a key region in the nation of regions known as the United States.

Robert L. Dorman is an associate professor of Library Science at Oklahoma City University. He is the author of Revolt of the Provinces: The Regionalist Movement in America, 1920–1945 and A Word for Nature: Four Pioneering Environmental Advocates, 1845–1913.

"The book is encyclopedically sourced and, hence, is reliable. Excellent works on regionalism have preceded it, but this leads the way. All Westerners should have a good look."—Oregon Historical Quarterly

"Readers with an interest in questions of regional identity and politics will relish this volume."—Utah Historical Quarterly

"A deeply researched and very useful study—one that presents the legacy of western regionalism in kaleidoscopic detail and very much reaffirms Dorman's status as a leading scholar of American regionalism."—Southern California Quarterly

"A striking and comprehensive account of US West social and literary history since the late nineteenth century."—Western American Literature

“This is a very readable book that shows a wide familiarity with a century or more of thinking and writing about the American West.”—Carl Abbott, author of How Cities Won the West: Four Centuries of Urban Change in Western North America

“Robert Dorman has written a very strong and valuable overview of regionalism in the twentieth-century American West. This is a thoughtful, provocative study.”—Richard Etulain, author of Re-imagining the Modern American West: A Century of Fiction, History, and Art