The Anime Machine: A Media Theory of Animation (Paperback) 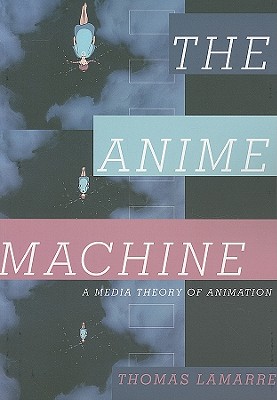 Despite the longevity of animation and its significance within the history of cinema, film theorists have focused on live-action motion pictures and largely ignored hand-drawn and computer-generated movies. Thomas Lamarre contends that the history, techniques, and complex visual language of animation, particularly Japanese animation, demands serious and sustained engagement, and in The Anime Machine he lays the foundation for a new critical theory for reading Japanese animation, showing how anime fundamentally differs from other visual media.

The Anime Machine defines the visual characteristics of anime and the meanings generated by those specifically "animetic" effects-the multiplanar image, the distributive field of vision, exploded projection, modulation, and other techniques of character animation-through close analysis of major films and television series, studios, animators, and directors, as well as Japanese theories of animation. Lamarre first addresses the technology of anime: the cells on which the images are drawn, the animation stand at which the animator works, the layers of drawings in a frame, the techniques of drawing and blurring lines, how characters are made to move. He then examines foundational works of anime, including the films and television series of Miyazaki Hayao and Anno Hideaki, the multimedia art of Murakami Takashi, and CLAMP's manga and anime adaptations, to illuminate the profound connections between animators, characters, spectators, and technology.

Working at the intersection of the philosophy of technology and the history of thought, Lamarre explores how anime and its related media entail material orientations and demonstrates concretely how the "animetic machine" encourages a specific approach to thinking about technology and opens new ways for understanding our place in the technologized world around us.

“Combining superb scholarship, a palpable passion for his subject, and a singular sensibility for the art of the moving image, Thomas Lamarre has produced a landmark work in cultural theory and media history. The Anime Machine navigates the intercultural and transmedia complexities of the worlds of anime with expertise and originality. Everyone from the anime enthusiast to the philosopher will come away with a heightened appreciation of one of the defining art forms of our era.” —Brian Massumi, author of Parables for the Virtual

“With the help of thinkers such as Deleuze and Guattari, Thomas Lamarre identifies in anime an originary machinic force, one that traverses both animation and cinema, with a capacity for heteropoeisis through technological practices. This is an inspiringly sophisticated and imaginative book.” —Rey Chow, author of Sentimental Fabulations, Contemporary Chinese Films