The Suburb of Dissent: Cultural Politics in the United States and Canada During the 1930s (New Americanists) (Paperback) 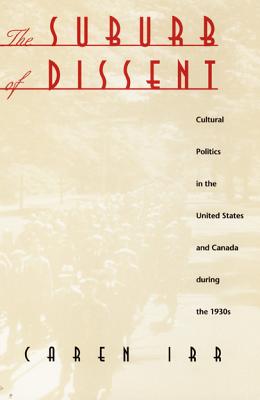 The Suburb of Dissent: Cultural Politics in the United States and Canada During the 1930s (New Americanists) (Paperback)


Email or call for price.
In The Suburb of Dissent Caren Irr explores the leftist literary subculture of the United States and Canada during the 1930s to reconstruct the ideas of mass culture, class, and nationality that emerged as a result of the Great Depression. Unearthing plots and characters that still surface in contemporary narratives, Irr juxtaposes classic and neglected works of criticism, fiction, poetry, and journalism and demonstrates how leftist writers resisted totalitarianism much more thoroughly than Cold War accounts would suggest.
Irr highlights works by Richard Wright, John Dos Passos, Nathanael West, and others to uncover the complex relationship between American anti-communism and communist anti-Americanism. In an unprecedented move, she extends her inquiry to the work of Canadian intellectuals such as Dorothy Livesay and Hugh MacLennan to reveal the important yet overlooked fact that the territory at the border of the United States and Canada provided a vital contact zone and transnational "home" for leftist thinkers. Attending to intersections of race, ethnicity, and gender, Irr illustrates the ways dissenting writers made culture actively respond to the political crises of the Great Depression and questioned the nature of what it means to be "American."
Drawing on insights from postcolonial and American studies and taking into account the intellectual and cultural dimensions of leftist politics, The Suburb of Dissent is the first study of the 1930s to bring together U.S. and Canadian writings. In doing so, it reveals how the unique culture of the left contributed to North American history at this critical juncture and beyond.
Caren Irr is Assistant Professor of English at Pennsylvania State University.